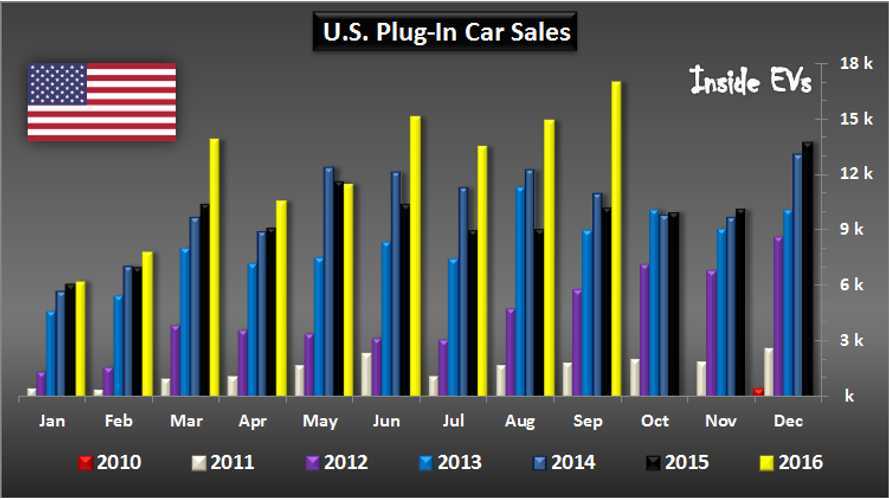 Over the past 4 months, and really all of 2016, the plug-in vehicle segment in the United States has taken off like it never has before, while reaching new highs this month.

About ~16,974 sales were reported in September (full details here), which is a record for both total volume of deliveries, and also year-over-year gains, at 67.5% - with nearly 7,000 more sales logged that a year ago.

With ~17,000 deliveries in September, we are now even more confident that 20,000 mark will fall later this year - most likely in December, as the $7,500 federal credit expire for fiscal year 2016 boosts sales...to say nothing of the pending arrival of the Chevrolet Bolt EV, the Toyota Prius Prime, and smaller offerings like the Chrysler Pacifica and Optima PHV.

Compared to the entire automotive market, plug-ins achieved another market share record in September of 1.18% penetration, as illustrated on the graph below:

Looking at the top 10 selling models for the US, it appears as though the Tesla Model S soon should get Nissan LEAF and Chevrolet Volt in range to compete for the "all-time best seller crown" (although some big changes coming soon to the Nissan LEAF might still have something to say about that), while the Model X breaks into the 7Top 9.