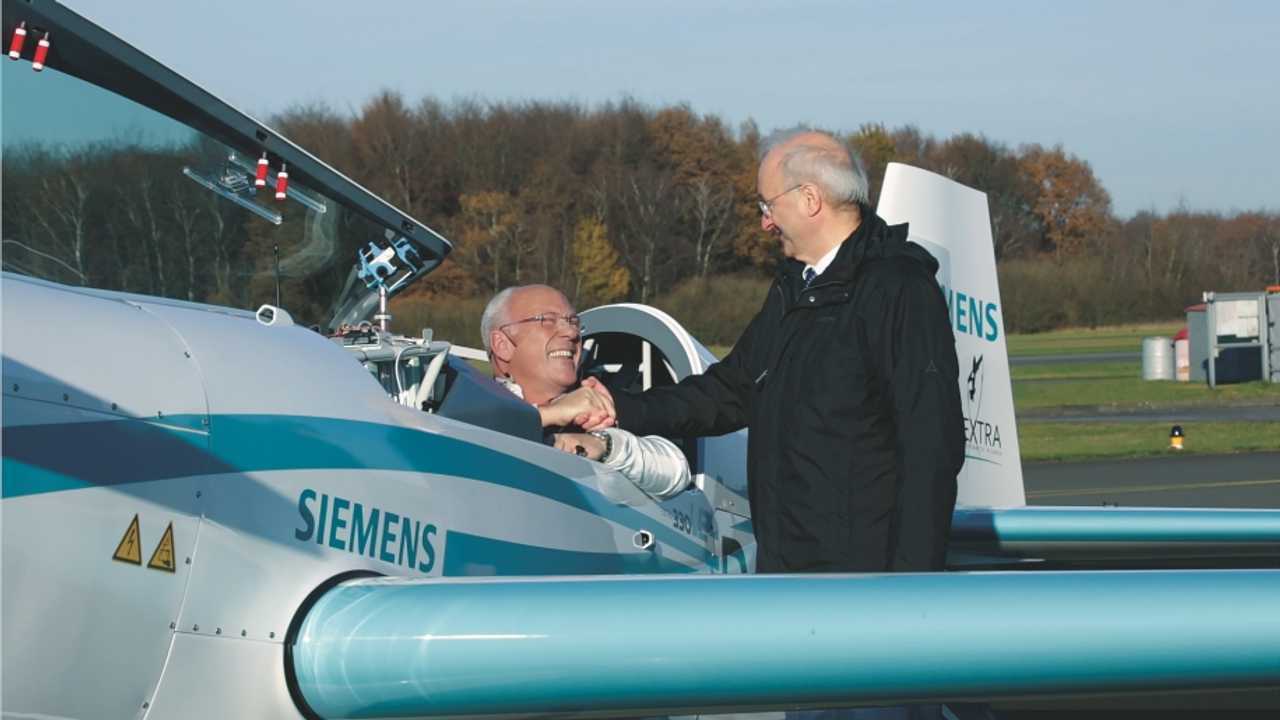 Frank Anton (right), who heads eAircraft within the next47 startup unit, congratulates pilot Walter Extra, who broke the world record in ascent on November 25, 2016.

That's one minute and 10 second faster than the previous record held by Chip Yates since 2013.

Siemens boasts that the 260 kW is continuous power output is from a motor weighing only 50 kg.

"Hünxe is a pretty little town in northwestern Germany that has its own local history museum, a castle and a small market square. It also has a landing field that entered the aviation record books on November 25, 2016. That was when Pilot Walter Extra set a new world record in ascent with the Extra 330LE aerobatics plane. Equipped with an electric drive system from Siemens, the electric aircraft reached an altitude of 3,000 meters in only four minutes and 22 seconds. The airplane rose into the air at 11.5 meters per second."

“This is a milestone on the path to electrification in aviation. This enormous achievement was possible only with digital technologies that enabled us to push our drive train to its technological limits.”

For Siemens, the Extra 330LE EV prototype is a test platform for commercial products that one day could include aircrafts with up to 100 passengers:

"The Extra 330LE two-seater will be the ideal test aircraft for the coming years, when the goal will be to analyze and further develop how the individual components of its propulsion system work together. Siemens will also bring the technology to its electric flight collaboration agreement with Airbus, which the two companies signed in April 2016. They want to prove the technical feasibility of hybrid electric drive systems for regional aircraft with up to 100 passengers by 2020. This will require power ratings of up to 10 megawatts. The two partners plan to develop hybrid electric regional aircraft on the basis of the record-breaking motor. “We expect to see the first aircraft with up to 100 passengers and a range of approximately 1,000 kilometers by 2030,” said Anton."