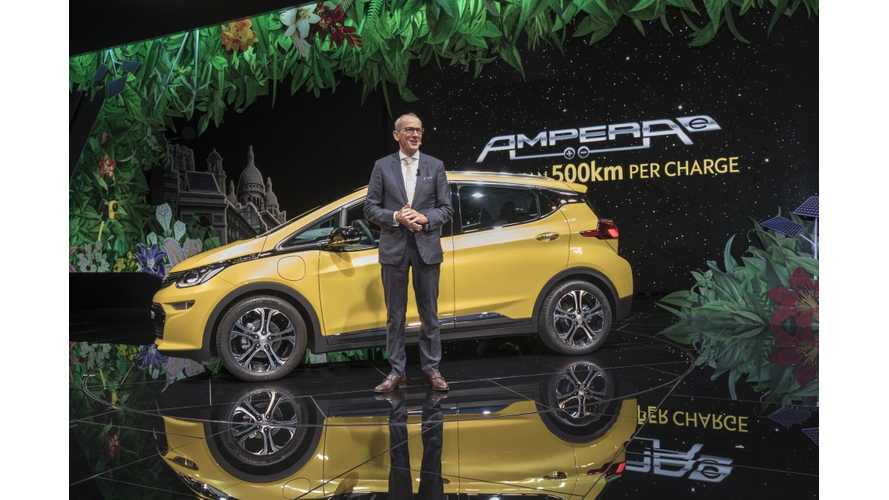 Prior to the Paris Motor Show and before the official unveiling of the new, longer range Renault ZOE, Opel had released this range graphic:

This old Ampera-E graphic had the car's range at 400 km + NEDC and the BMW i3 was in second place on the chart.

Following the reveal of the ZOE 40 (quite literally - on the same day), Opel updated its graphic to look like this while making its own first appearance at the show (video below):

Note the graphic now shows the Ampera-E's range at 500 km+ (310 miles) and the improved ZOE is soundly in second at 400 km. It's also worth point out that the VW e-Golf moved from 190 km on the old graphic to 300 km on this new one following VW's announcement in Paris that the e-Golf was getting a significant upgrade.

Of additional interest is that in the press release, Opel explains why NEDC isn't very useful and says that it "tested the Ampera-e approximated to the speed profile defined in the WLTP (Worldwide Harmonized Light-Duty Vehicles Test Procedure) driving cycle (shortened test procedure)" to provide a more valid indication of real-world range. The range result based on this test is 380 km (236 miles), which is just about exactly the same as the EPA rating for the Chevrolet Bolt (238 miles).

We should of course note that unlike the Opel Ampera-e/Chevrolet Bolt EV which was announced almost 2 years ago, and still has a undetermined  price and European release date (mid 2017?) - the new 400 km ZOE ZE was revealed and priced on a Thursday (although we broke the news on the Tuesday) and went on sale on the Saturday.

Something that persons concerned about the lack of any new plug-in offerings (or commitment) yet to materialize from the other half of the Renault-Nissan Alliance, should probably bear in mind as we move past the first major auto show of the season.

Opel Ampera-e with Range of Over 500 Kilometers

Rüsselsheim/Paris. This Opel is simply electrifying: The German carmaker is revolutionizing electro-mobility with its battery electric Ampera-e at Paris Motor Show. With its range of more than 500 kilometers (electric range, measured based on NEDC test cycle in kilometers: >500, preliminary figures) the exhibition star outperforms its closest segment rival currently on the road by at least 100 kilometers.

Ope Ampera-e out for a spin

“With the new Ampera-e, we continue the largest model offensive in Opel’s history,” says Opel CEO Dr. Karl-Thomas Neumann. “The Ampera-e with its outstanding range makes electric mobility fully feasible for everyday use and also lots of fun.”

While the NEDC cycle is important to create comparability, the test cycle does not truly reflect everyday reality. In real world, factors such as road characteristics, weather conditions, driving style or additional load influence the range. Opel therefore also tested the Ampera-e approximated to the speed profile defined in the WLTP (Worldwide Harmonized Light-Duty Vehicles Test Procedure) driving cycle (shortened test procedure). The WLTP results are closer to real driving behavior. And the Opel Ampera-e also delivers here: Based on the development test, the engineers estimate the combined WLTP range to be more than 380 kilometers. Naturally, the range in everyday use will vary and depends on personal driving behavior and on external factors.

Apart from providing ease of mind during long journeys, the Ampera-e can also offer the feistiness of a sportscar. The performance of the electric engine is equivalent to 150 kW/204 hp (PS) thus making effortless starts from a standing position or highway access two of the Opel Ampera-e’s main strengths. The compact electric car accelerates from 0 to 50 km/h in 3.2 seconds. And as the large, 60 kWh capacity batteries are cleverly integrated in the underbody, the car also offers ample space for five passengers and a trunk with the load capacity of a five-door compact class car. Furthermore, the Ampera-e comes with Opel-typical outstanding digital connectivity thanks to OnStar and smartphone projection.

“Our Ampera-e is not eco-luxury, not a gadget and not just a second car. Opel is showing that electro-mobility is also achievable for a much broader audience thanks to the most innovative technology – Opel is democratizing the electric car with the Ampera-e,” said Opel CEO Dr. Karl-Thomas Neumann.