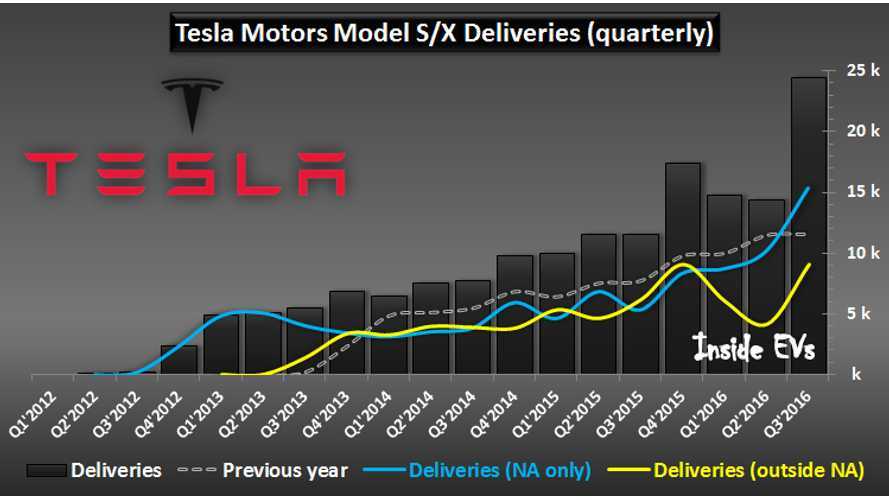 Preliminary Tesla-reported sales data shows record production and deliveries of both the Model S and Model X in the third quarter of this year.  In total, 24,500 vehicles were delivered, while 25,185 were produced over the three month period.

When we combine these numbers with IEVs' estimates of US deliveries (see monthly US sales scorecard here), we see a picture of more than 15,000 domestic deliveries, leaving about 9,000 outside North America.

For the most part, the high slant to US registrations on Tesla vehicles for 2016 so far has been a result of the initial domestic production/delivery focus for the Model X, as well as the addition of new trim levels for the Model S (both in 60 kWh and 100 kWh versions).

It is quite simply easier to deliver new products in your own backyard first (and subsequently repair them if any teething issues pop up) - especially when you are attempting to hit aggressive sales guidance; of which, Tesla is aiming for 80,000 EV sales in 2016 ... and has achieved ~53,712 so far.

With that in mind, and despite the Model X's arrival in volume internationally (finally) for the first time in September (such as 601 X's in Norway, 201 in the Netherlands, and 129 into Sweden during the month), Tesla's domestic deliveries could stay elevated into Q4, as the demand for plug-ins for the last months of a calendar year are always accelerated in America - as a product of the way the $7,500 federal credit program works.

Our expectation would be for the delivery demographic mix to balance itself out again starting in Q1 of 2017, through the introduction of the Model 3 in volume production (likely in late Q3).

As foreshadowed by the company itself, Q4 sales are expected to be slightly higher globally over Q3 results.