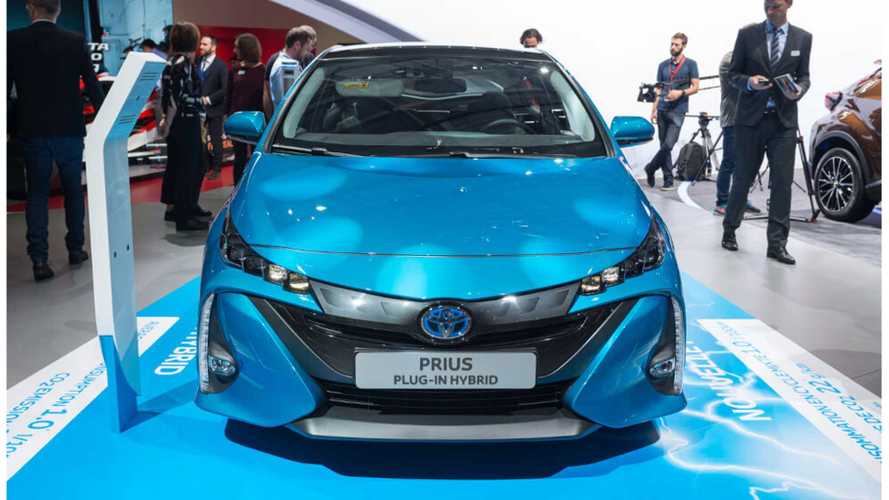 The original Plug-In Prius didn't succeed in Europe like it did in North America, as only about 10,500 were sold in Europe (roughly a fourth of the amount moved in the US) out of over 75,400 total.

But as Toyota's hybrids are getting more popular in Europe, the second generation plug-in - the Prius Prime which debuted this week at the 2016 Paris Motor Show will definitely be more well received.

For Europe specific, Toyota is switching to European Type 2 charging inlet (instead of Type 1, aka J1772 for all the markets in the first generation).  That would suggest that any all-electric model with DC charging in the future could be equipped with CCS Combo (based on the Type 2 in Europe).

A powerful response to customer feedback on the first generation Prius Plug-in Hybrid, Toyota’s new PHV is not only a significant evolution of the latest generation Prius, but also a truly unique vehicle in its own right.

With an EV range doubled to over 50 km and maximum EV speed increased from 85 to 135 km/h, the new Prius Plug-in Hybrid represents a huge leap forwards in efficiency, driving performance, innovation and styling, whilst remaining true to Toyota’s goal of creating the ultimate eco car.

At the heart of the new Prius Plug-in Hybrid is the latest generation of Toyota’s advanced PHV technology. It offers customers two cars in one; an even more sophisticated full hybrid powertrain and a real, all-electric EV driving experience with double the range of the previous generation model.

Located under the rear loadspace, a large capacity lithium-ion battery is fundamental to the new Toyota PHV’s significantly improved 50 km EV range. Battery volume has been increased from 87 to 145 litres, its energy capacity doubled from 4.4 to 8.8 kWh and yet, at 120 kg, it’s just 50% heavier than its predecessor.

EV power has also been increased by some 83% thanks to the development of the Toyota’s first hybrid powertrain to feature a Dual Motor Drive System. A new, highly-compact one-way clutch within the transaxle allows the hybrid system generator to act as a second electric motor. This boosts EV driving power to 68 kW for better acceleration and an even more engaging performance, whilst greatly reducing engine start up frequency.

The further minimising of engine usage whilst the Prius Plug-in Hybrid is operating in EV drive mode is assured through the enhanced efficiency of the new PHV system, which builds on the 4th generation full hybrid technology powering the new Prius with several sophisticated new technologies.

Another world first, the auto air-conditioning is now powered by a gas-injection heat pump which will heat the cabin in outside temperatures as low as -10 degrees C, without starting the engine, hence minimising the impact which heating the interior has on EV driving range.

Far more efficient than engine heating or high power electric water heaters, the heat pump can efficiently warm the interior using heat absorbed from the outside air. Mounted to the heat pump system, the gas-injection mechanism ensures heating performance even when outside temperatures are low.

Moreover, during charging, a new battery warming system will warm the cells to an efficient working temperature in outside conditions as cold as -20 degrees C. This ensures that both battery power and efficiency are maintained at a sufficient level to minimise the impact of cold weather on EV driving range, with full power available from start off in even very cold conditions.

Its maximum charging power increased from 2 to 3.3 kW, the battery itself can be fully charged up to 65% more quickly; in only 2 hours using the Type II Mode III Mennekes connector, and 3 hours and 10 minutes using a standard household plug socket. The charging process is now programmable weekly on a day-by-day basis, and includes the facility to simultaneously charge and pre-cool or pre-heat the cabin.

At 4,645 mm long, 1,760 mm wide and 1,470 mm high, the new Toyota PHV is 165 mm longer, 15 mm wider and 20 mm lower than its predecessor, with front and rear overhangs lengthened by 25 mm and 80 mm respectively, over the 4th generation Prius. A reduction in cowl height and in rear spoiler height further emphasises the car’s long, sleek side silhouette and low centre of gravity.

The strong forward projection of the grille is emphasised by the highly aerodynamic sculp-ting of the bumper sides, whilst the vertical location of the Daytime Running Lights (DRL) and LED turn indicators at the extreme edges of the front fenders reinforce the low, wide, ground-hugging stance of the vehicle.

In profile, the Prius Plug-in Hybrid may be identified not only by its longer rear overhang and lower cowl and rear spoiler heights, but also by PHV-specific, two-tone 15” alloy wheels designed to enhance brake cooling.

To the rear, the cross-sectional shape of the PHV-unique, aerodynamics-enhancing, ‘double-bubble’ rear screen is carried into the curve of the rear spoiler, at the extremities of which are integrated rear LED light clusters, again unique to the Toyota PHV.

A comprehensive aerodynamics package is key to achieving the fuel consumption reducing benefits of a remarkably low, class-leading drag coefficient of only Cd 0.25.

The new Toyota PHV builds on the already highly efficient aerodynamics of the latest Prius with a lower roof and rear spoiler height, an enlarged area of underbody covers, airflow rectifying front and rear bumper corners, the double-bubble rear screen and aero stabiliser fins built into the rear combination lamps.

In addition, the new Prius Plug-in Hybrid features a shutter built into the lower front grille, which is automatically opened or closed to optimise the flow of cooling air into the engine bay, reducing air resistance.

When the engine is cold, the grille shutter is closed to suppress engine cooling airflow and shorten the engine warm-up time, contributing to lower fuel consumption.

The new Prius Plug-in Hybrid shares the dashboard design of the latest Prius; a clear, structural arrangement of layered information which places the driver’s meters at distance and the displays close at hand.

However, the new Toyota PHV benefits from a larger, 8” infotainment screen with updated, 2016 graphics. The dual 4.2” TFT driver’s meters also feature PHV-specific graphics. The Prius Plug-in Hybrid instrument panel may be further identified through high-quality, satin chrome-plated ornamentation on the white base of the shift panel.

The luggage deck has been raised by 160 mm to accommodate the larger plug-in hybrid system battery, with maximum loadspace volume now 360 litres.

Every aspect of the advanced technology aboard the new Prius Plug-in Hybrid has been designed to improve the efficiency of the vehicle’s PHV powertrain, and to promote an environmentally-conscientious lifestyle.

The successful development of technology first revealed on the Auris HSD concept in 2010, the roof of the new Toyota PHV can incorporate a large solar panel which generates electricity to charge the hybrid system battery.

When the vehicle is parked (but not plugged in to a charging socket), the solar roof charges a solar battery which, when fully charged, delivers a pumping charge to the main HV battery.

During driving, the solar charging system charges the 12 volt auxiliary battery, compensating for auxiliary load and thereby reducing the energy consumption of the main HV battery.

Solar charging can increase the EV driving range of the new Prius Plug-in Hybrid by up to maximum 5 km per day, equating to some 1,000 km of all-electric driving per annum.

The range of driving modes available now includes a Battery Charge Mode which uses the engine to generate electricity and charge the battery when the vehicle is operating in HV mode.

These qualities are also enhanced by the Prius Plug-in Hybrid’s new double wishbone rear suspension, which produces one-third the level of shock when driving on uneven roads compared to the current model. To achieve better handling with more direct response, the front MacPherson strut suspension has also been revised.

The significantly improved dynamic characteristics of the new chassis are matched by the more responsive character of the new plug-in full hybrid system. The 83% boost in EV power due to the hybrid transaxle’s Dual Motor Drive System offers drivers highly responsive acceleration characteristics.

Finally - and complimenting the quietness that comes from the improved EV capabilities - a particular focus has been placed on minimising NVH (Noise, Vibration and Harshness).

The optimum placement of sound suppressing and absorbing materials at the source of noise offers occupants unique levels of cabin quietness.