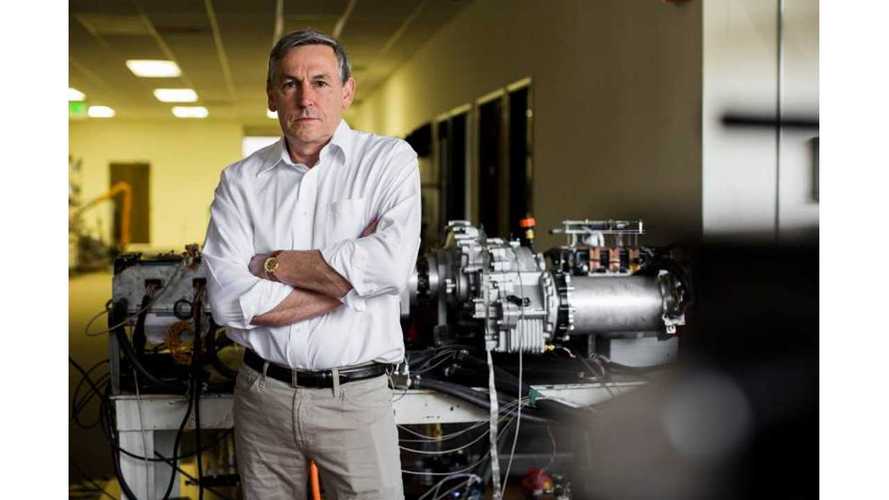 Ian Wright, Founder & CEO of Wrightspeed, and co-founder of Tesla Motors doesn't really believe in the short term prospects for success in building an affordable passenger electric cars, which he didn't hide even when it comes to his Tesla roots.

Of course, the fact he is now in the business of building electric hybrid powertrains for large commercial vehicles (which we still definitely approve of) may have something to do with that stance.

By way of 2016 World Economic Forum, where Wrightspeed was named a Technology Pioneer, Mr. Wright penned an interesting article on the questions that we should really be asking about electric cars?  Or rather, the greater benefits of focusing on converting the 'work-horses' of transportation industry of today first.

Ian Wright notes that EVs are very efficient, but they only hold 0.5% of market share (although the "new norm"going forward is quite likely the ~1% level that was hit in the US in June), and the reason is a lack of scalability.

The answer for that - at least for heavy duty trucks and buses targeted by Wrightspeed - are turbine generators or range extenders. Calculations shown in the article show that switching class 8 trucks to range extended electric vehicle (REV) would benefit from a short payback period and huge savings - something that can't be found today (or in the near future) for small electric vehicles.

"The question we should really be asking about electric cars"

"So, why do plug-in vehicles only make up half a percent of the total market? Scalability.

When thinking about scaling electric vehicles, it's almost as if we asked the wrong question. If you ask, “How can we make more efficient cars?” to a roomful of engineers, you will immediately get back “What's the most efficient car we make? And how can we make it better?” And you will get a Nissan Leaf.

If instead you ask, “How can we save the most fuel, per vehicle per year, to get the shortest payback?” You will immediately get asked, “Which vehicles burn the most fuel per year, in the hardest drive cycle?” The answer: trucks. Big, smelly, noisy garbage trucks. Driving 130 miles per day at 2.8 MPG is about 12,000 gallons of fuel per year. At $3.75 per gallon, that’s $45k on fuel alone, not even including maintenance. If we get the same proportional gain as in the Leaf case, we would save 8,366 gallons per year, or $31,372. Plus about $20k per year goes on maintenance, mostly for the brakes. That’s $51k saved per truck, per year.

While it costs about 10 times more to build a powertrain for a garbage truck than for the Leaf, it is actually a more economic proposition. For an additional $150k to replace a conventional diesel powertrain with a range extended electric vehicle (REV) powertrain, the payback is simple: $150k/$51k in fuel and maintenance per year in just under three years. Thus, the economic opportunity to scale electric drive with garbage trucks is an order of magnitude greater than a personal car. The economics are comparably compelling in scores of other heavy- and medium-duty applications – from delivery trucks and city transit buses to drayage trucks.

The cost of the powertrain goes up as you move up into heavier vehicles with harder drive cycles, but the fuel and maintenance saving goes up much faster.

You may ask: can you even do that? And the answer is yes. Locomotives have had electric drive for more than 100 years, and freight trains can weigh 10,000 tons. Massive mining trucks use electric drive. The Queen Mary 2, at 75,000 tonnes, is propelled by four 28,800 horsepower electric motors. So Class 8 garbage trucks that weigh 66,000 lbs. or heavy public transportation buses certainly can too. But it can't be done with batteries alone. The battery pack for a Class 8 garbage truck would weigh 10,000 lbs., cost half a million dollars, and take up half the payload space.

However, it can be done with a range-extended EV powertrain, with only a sixth of that battery pack, and a 50kW range extender or turbine generator, which is actually ideal for these applications. The battery pack can be sized to deliver the peak power (or more importantly, to absorb the peak regenerative braking power) while the range extender only needs to supply average power, which is surprisingly low. That's a consequence of the drive cycle. One-hundred-and-thirty miles in an 8-hour shift is only 16 mph.

If we analyze scalability for the shortest payback time, a range-extended EV powertrain is the clear winner for a Class 8 garbage truck and also for our cities’ most demanding vehicles. The scaling properties work towards the higher consumption vehicles and away from the light duty vehicles. Moreover, a powertrain’s fuel, and maintenance savings all follow a curve and as vehicle weight is reduced and the drive cycle relaxed, the payback gets longer, or vice versa. With current fuel and battery prices, 14,000 lbs. loaded weight in a metro delivery drive cycle is about the lowest limit for a reasonable payback, so Class 8 garbage trucks are the holy grail for displacing fuel and making big savings.

When we think about scaling EVs, it pays to ask the right question. At Wrightspeed, rising demand for our Route powertrain throughout the global transit market indicates the scalability of our approach to transit. Our customers, including FedEx, Ratto Group and NZ Bus, show the strong business case in opting for REV powertrains to improve efficiency and performance for the most challenging jobs on the road. Ultimately, REV powertains offers an ideal and economically attractive to tack urban drive cycles and offers an effective way to improve urban conditions."