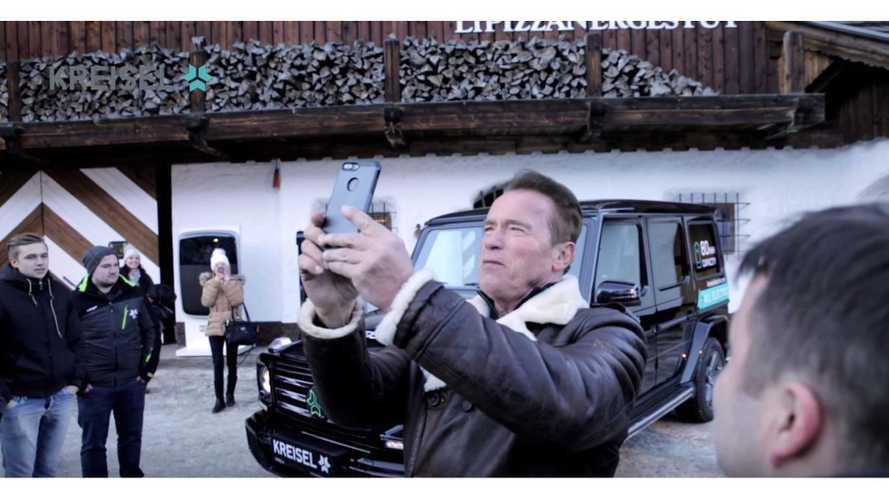 Former Hummer "spokesman" Arnold Schwarzenegger apparently has a newfound interest in the environment.

However, he's not willing to give up his love for large, capable SUVs, with legendary off-road prowess. How about an all-electric Mercedes-Benz G-Class? Too bad for Arnie, MB isn't making one.

How about an all-electric Mercedes-Benz G-Class?

It turns out that when money isn't a factor, you can get whatever you want ... within reason. The current boss of Celebrity Apprentice contracted Austria-based Kreisel Electric, a company that is known for electrifying vehicles.

Kreisel recently made its own version of the VW e-Golf, built on a regular Golf platform, and beat VW's range by triple. Kreisel's new MB G-Class, that's now in the hands of Arnie, boasts 186 miles of range, and more power than the ICE version.

Schwarzenegger's new ride, equipped with an 80 kWh battery pack, will take you on a zero to 62 mph sprint in 5.6 seconds. The company claims that its battery technology allows for an 80 percent charge in about 25 minutes. However, Kreisel didn't clarify the charging specifics.

Kreisel Electric is working to make its name in electrifying vehicles. The company hopes to get the attention of OEMs through projects such as this. It is already in the process of building a battery factory and may have "unofficial" future plans with some automakers.

Arnie is shipping his new ride back to California and is exciting to start testing it out.

The specialist for electromobility Kreisel Electric has electrified the off-road vehicle Mercedes G. At the Hahnenkamm race in Kitzebuehel they presented the electric car to the public for the very first time.