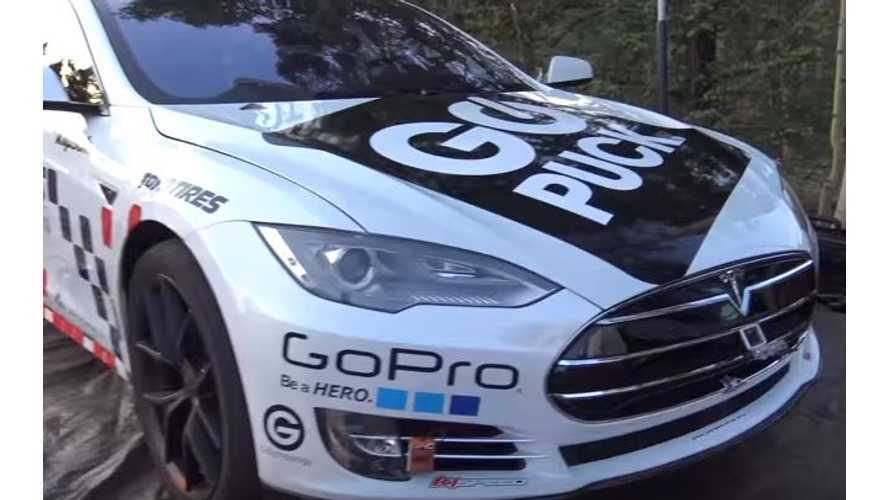 Blake Fuller, founder and CEO of Go Puck wearable battery packs, is the man behind this race-ready Model S.

Editor's Note:  Pike's Peak race is now complete.  We will have a full race recap/video up shortly.  The top finishing electric car placed 2nd (in the overall standings), driven by Rhys Millen in the PP100.

Details still remain limited, but we do know that this S has been heavily modified and includes a significantly lighter battery pack.

“Fuller wants to break the 13 minute record in the Electric Production class and in order to do so, he developed a new battery pack for his Model S which is 80 percent lighter than the factory one."

This particular Model S, with its heavy modifications, doesn't seem likely to qualify for the "Electric Production" class, but if it does, then it will be the lone entry in that field and it should have no problem breaking the record for that class, which currently stands at 12 minutes 55.591 seconds set by a Honda Fit EV back in 2014.

Update (June 26th):  Fuller's Model S indeed did set a new record in the "Production Electric Car" class, as CarScoops' original report of a heavy modified version of the Model S being entered, specifically related to the battery was inaccurate, as it ultimately ran near-stock, less 800lbs of extra weight removed.

This rather lengthy video takes us "behind the scenes" of this one-off Model S.