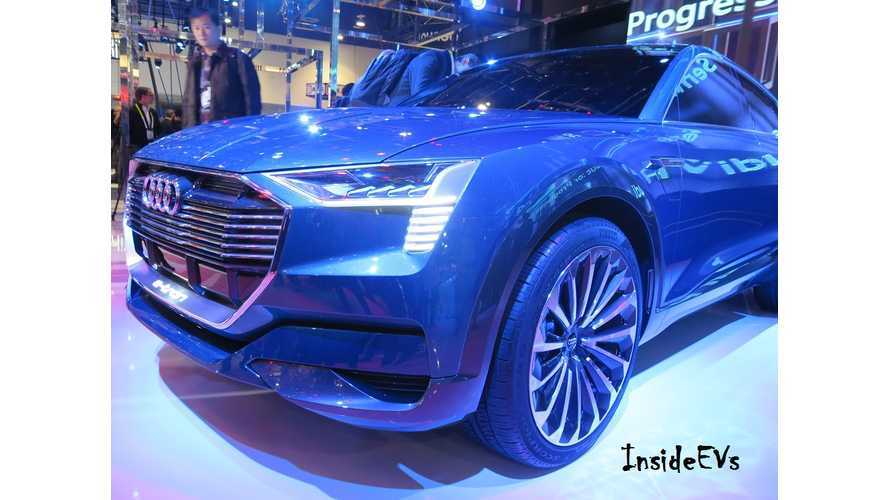 Audi plans to use its vast experience to push past Tesla in the EV market in the years ahead. The company believes that German automakers will increase range drastically by 2020, making vehicles more attractive and creating true competition for Tesla. Architect of Audi's electric car engineering, Stefan Niemand, said:

Nissan still dominates the market with the LEAF, as it is cost effective and widely available, however it's a compact car and rarely gets notice for its "good looks". The Tesla Model S is the "go to" car for sporty, high-performance, long-range, all-electric, full-size sedans. There really is nothing on the market that compares to it yet. It is pricey at around $70,000 for a base model.

Tesla now has upwards of 400,000 reservations for the upcoming Model 3, which will be much more affordable than the Model S. CEO Elon Musk assures that Tesla will be making 500,000 cars a year by 2018. Niemand believes that Audi can challenge that, all the while using better materials. He said:

VW Group sold about 10 million vehicles in 2015, and nearly all of them were been ICE. The company only has two electric options so far. One is the Up city car and the other an electric VW Golf. However, the company is reporting plans to introduce 30 electric vehicles by 2025, with about 3 million electric vehicles sold per year by that time. Colin McKerracher, Bloomberg New Energy Finance Analyst, explained:

“Audi and the VW Group are well positioned here. Groups like VW, Toyota and others know how to crank out vehicles day-in-day-out on a global scale . . . Tesla definitely got the jump on the major car companies as demand for the Model S caught many of them by surprise, but by 2020 there will be a much larger number of long-range electric vehicles available."

Many companies are coming forward with plans for the future, which include EVs. Many of the plans are forecasting 2020 as a starting point. There have been multiple companies reporting substantial developments by 2025 or 2030. While it is never too late, one can only hope that there is follow through, and as quickly as possible.