This Tesla Owner Put A Supercharger In His Own Garage - Video 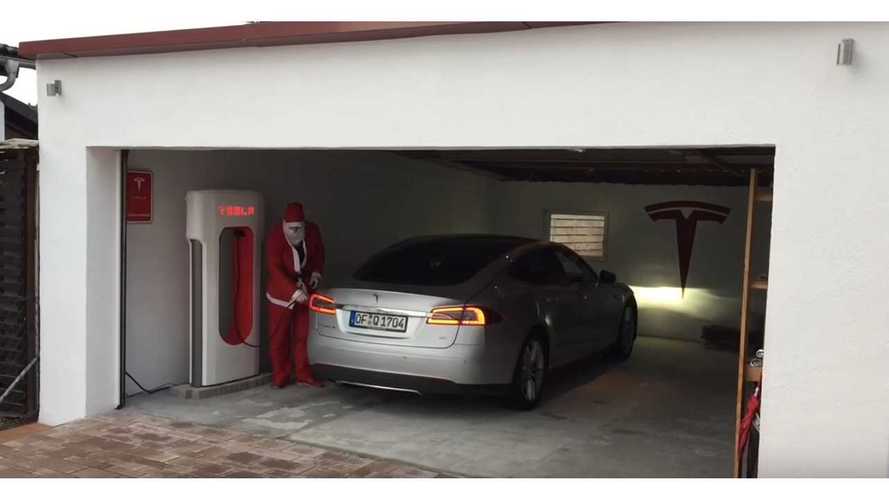 PUTTING A TESLA SUPERCHARGER IN YOUR GARAGE

*This article comes to us courtesy of Evannex (who also makes aftermarket Tesla accessories). Authored by Matt Pressman.

Check out the video (see below) from what appears to be a French Tesla owner, youtuber alneet77. It turns out that CleanTechnica may have actually uncovered an even bigger scoop — apparently there's a Tesla owner who has a real Tesla Supercharger at their residence. It's reported that, "the vice ruler of Dubai, His Highness Hamdan bin Rashid Al Maktoum, has both a Tesla Model S and a Tesla Supercharger at his home...  could charge in '15–20 minutes'" — wait, what? That's faster than what's out there today? Does he have an early ultra-fast Tesla Supercharger 3.0? We hope CleanTechnica gets more info on this seeing that they also just uncovered that, "Tesla is opening a store in the UAE next month."

Above: Check out the Tesla Supercharger in an owner's garage (Youtube: alneet77)

Alright, maybe you're not middle eastern royalty who has access to a personal Tesla Supercharger. And, maybe you're not as handy as that French Tesla owner who built his own (very cool) Supercharger replica in his garage. You can still transform your own garage to give it a bit more Tesla flair. Teslarati reports on a Model S owner who created, "a Tesla gallery inside his garage...  everything about a Tesla showroom, from the clean and modern design to the relaxed lounge-like atmosphere, is intended to... invite passersby to come sit, relax and often daydream about owning the Tesla." This might make your neighbors jealous, check it out...

Above: Model S owner transforms his garage into a Tesla showroom (Youtube: DÆrik)

How did he do it? It's reported that he started by "purchasing paint in the same Tesla red color after locating the paint code (2087-10) online. Erik also indicated that he purchased the same table-chair combination used across Tesla galleries, further adding to the authenticity of his private showroom. Using MDF board as the the material for creating the floating 'TESLA', Erik painstakingly cut and sanded each letter to form the full logo. Each letter was then attached to the newly painted Tesla red wall." So whether you can get your hands on your own Supercharger, create a replica, or (at least) spruce up your garage, hopefully you get some ideas for a fun weekend Tesla-themed activity.

*Editor’s Note: EVANNEX, who also sells aftermarket gear for Teslas, has kindly allowed us to share some of its content with our readers. Our thanks go out to EVANNEX, Check out the site here.