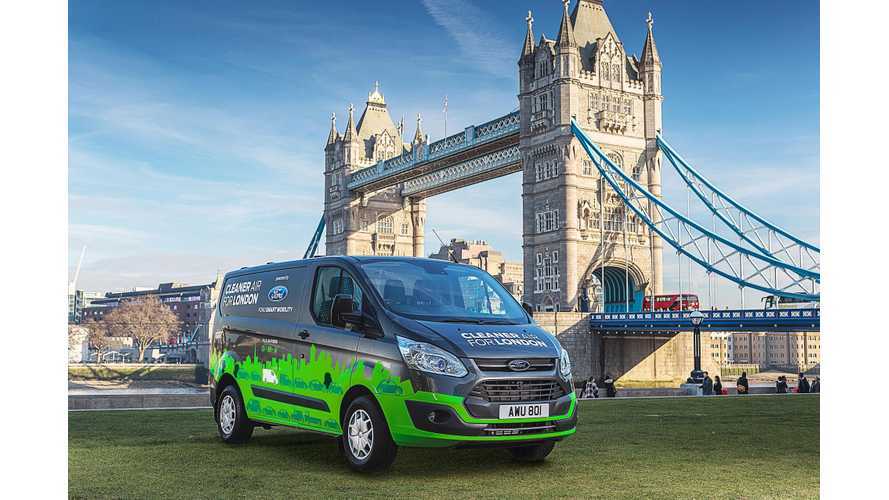 The Ford Transit Connect plug-in is back!  Well, kinda.

Ford has announced trials of some Transit Custom Plug-in Hybrid vans in London, which is scheduled to launch in the Autumn of this year.  In total, 20 vans will be tested over a 12-month period by select London businesses.

Ford secured some £4.7 million ($5.8 million) for the project via a grant from the Advanced Propulsion Centre and is supported by Transport for London.

Sadly there is no details about specific battery capacity, all-electric range or other technical data.  Which seems fairly counter-productive to promoting the vans...but we digress.

"Commercial vehicles in London make 280,000 journeys on a typical weekday, travelling a total distance of 8 million miles (13 million km). Vans represent 75 per cent of peak freight traffic, with over 7,000 vehicles per hour driving at peak times in Central London alone.

Ford will provide 20 PHEV Transits to a range of commercial fleets across London, including Transport for London’s fleet, to explore how such vans can contribute to cleaner air targets while boosting productivity for operators in urban conditions – the toughest working environment for vehicles. The project is supported financially by the U.K. Government-funded Advanced Propulsion Centre."

"The Transit Custom PHEV vans in the London trial are an advanced design that allows them to be charged with mains electricity for zero-emission journeys, while featuring an efficient on-board combustion engine for extended range when longer trips are required. Ford is the first volume manufacturer to offer PHEV technology in this segment of the van market.

The trial fleet will operate in everyday use across a cross-section of city-based businesses, using a Ford telematics system to collect data on the vehicles’ financial, operational and environmental performance to help understand how the benefits of electrified vehicles can be maximised.

Development of the 20 Transit Custom PHEV fleet trial vehicles has been supported by a £4.7m grant from the Advanced Propulsion Centre. The vans are being designed and engineered at Ford’s Dunton, U.K., technical centre, and at Prodrive Advanced Technology in Banbury, U.K., with programme support from Revolve Technologies."

“Ford is the No. 1 commercial vehicle brand in Europe and it’s now going electric. Teaming up with our London partners, we will also be able to trial software and telematics with enormous potential to reduce emissions and costs in the city. This new type of partnership demonstrates our evolution to both an auto and mobility company. We have lots of work to do, but everyone is so energised by this breakthrough opportunity.”

“The freight sector’s transition to ultra-low emission vehicles is central to cleaning up London’s toxic air. Transport for London continues to lead by example by increasing the number of its own vehicles that are electric and will find the data from these trials an invaluable resource for the LoCITY programme, which encourages the uptake of low emission commercial transport.”