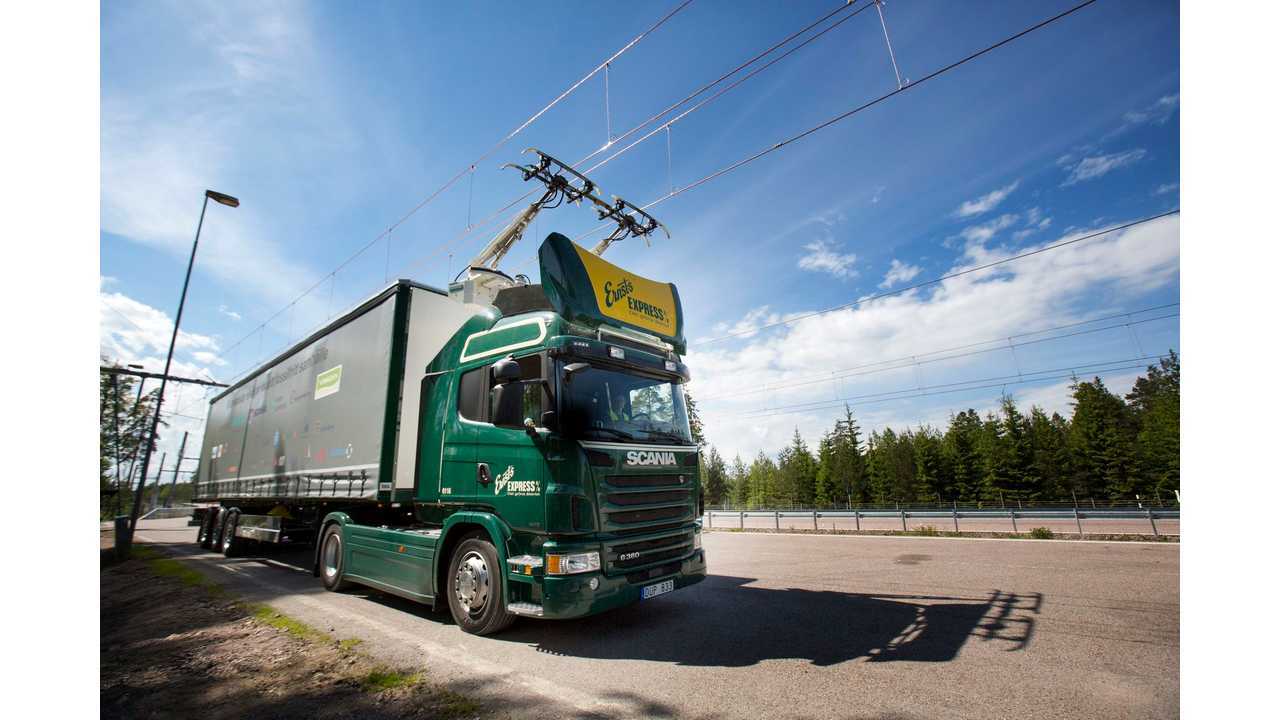 Sweden has launched the world's first electrified road - the eHighway, near the city of Gävle, which enables trucks to drive emission free on just electricity.

The demonstration project utilizes a two-kilometer/1.25 mile strip of catenary (750 V DC) on the E16 motorway, developed by Siemens.

The beauty of the new technology, which is the result of several years of cooperation between the Swedish Government and the private sector, is that it permits the trucks to operate as electric vehicles when on the electrified road and as regular hybrid vehicles at other times. All the Scania trucks on the road are hybrid and Euro 6-certified, running on biofuel."

Hybrid trucks with special pantographs were supplied by Scania (part of Volkswagen Truck & Bus). Without a direct connection, these truck's 5 kWh battery are capable of driving some 3 km/1.8 miles of driving - on top of 2 km/1.25 on the eHighway.

Test will continue up through 2018.

"The truck receives electrical power from a pantograph power collector that is mounted on the frame behind its cab. The pantographs are in turn connected to overhead power lines that are above the right-hand lane of the road, and the trucks can freely connect to and disconnect from the overhead wires while in motion.

When the truck goes outside the electrically-powered lane, the pantograph is disconnected and the truck is then powered by the combustion engine or the battery - operated electric motor. The same principle applies when the driver wants to overtake another vehicle while on the electrified strip of the road.

Scania´s sees the electric road as being a key component in achieving Sweden’s ambition of an energy-efficient and fossil-free vehicle fleet by 2030. It can also help to strengthen Sweden’s competitiveness in the rapidly-developing area of sustainable transport."

"The investment in the Electric Road E16 programme in Gävle is a result of a programme for the public procurement of innovative solutions that was launched by Swedish authorities. The programme consists of about SEK 77 million in public money, with about SEK 48 million in co-financing from the business community and the Gävleborg regional authority, which administers the area of Sweden where the electric road is situated.

The Swedish transport authority Trafikverket, the Swedish Energy Agency Energimyndigheten, innovation agency Vinnova, Scania and Siemens are the main funders of the technology, while Region Gävleborg is the project coordinator.

The electric road is only one of several pioneering technologies that Scania is working on to help the spread of sustainable solutions within both urban and long-haul transport. The company is also developing technologies for alternative fuels, hybridised and fully-electric vehicles, and autonomously and wirelessly-connected transport in parallel with its work to further enhance and refine the products of the future."

Nils-Gunnar Vågstedt, who is responsible for Scania’s research into electrification, adds:

“The potential fuel savings through electrification are considerable and the technology can become a cornerstone for fossil-free road transport services.”

Technical parameters of the Scania vehicle: