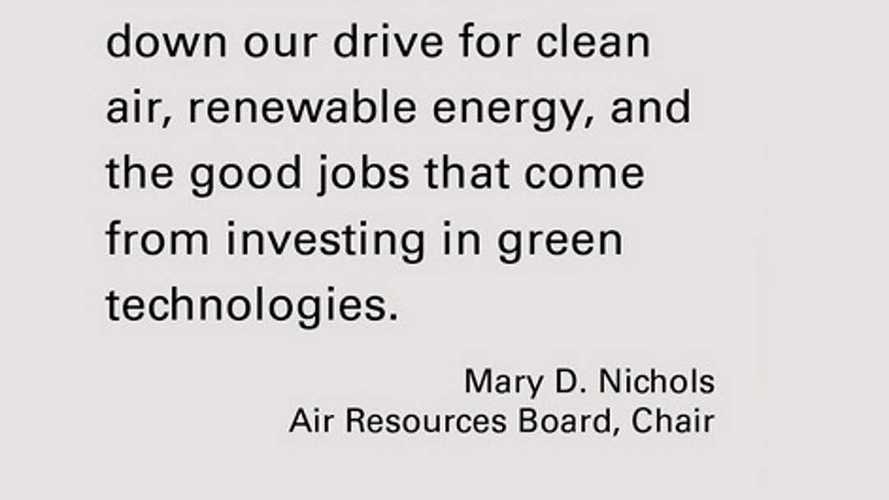 Mary Nichols (CARB Chair), the "big dog" in the fight for EVs against new EPA boss Scott Pruitt, talks up all things green!  (via @MaryNicholsCA)

There has been a lot of news of late about the EPA's decision to speed up and finalize CO2/fleet mpg requirements in the US ahead for the time period of 2022-2025 - lest it be struck down and replaced with something far more favorable to automaker maker's interests, courtesy of the new administration and famed EPA-suer, now EPA boss, Scott Pruitt.

And there has also been a lot of recent talk surrounding Donald Trump's controversial pick and his not-so-veiled comments about getting California's Air Resource's Board (CARB) harmonized under his thumb.

At Pruitt's recent EPA confirmation hearing this week he said that he would not only open a review of the emission standards recently finalized by the agency he takes over, but also said he would review waivers that grant California the ability to impose stronger standards than the federal government.

Naturally, the response to that by (mostly Democrats) was not so positive.  Said California's new senator Kamala Harris (via the Charlotte Observer).

“I have real concerns on where he will go on that issue, and others,” said Harris in an interview following the first half of the hearing. She said “it could do real harm to California” if Pruitt were to revoke California’s longstanding authority to limit auto pollution and greenhouse gases.

But CARB Chair Mary Nichols is one tough lady, and she is ready for the upcoming challenge to California's mandate for cleaner cars, and the production of more and more zero emission vehicles.

Further building a strong base of common sense (and science) of which to fight, CARB released a tidy 667 page "Midterm Review of (the) Advanced Clean Cars Program" in the state, that basically outlines that today's automakers are hitting the benchmarks laid out for them, and are more than capable in the future of continuing doing so...and that in fact, the report suggests they are doing so well below the projected costs from when the program went into effect in 2012.

The report said today's existing program in California "will add at least 1 million zero-emission vehicles on its roads and highways by 2025."

"The recent Detroit auto show shined a spotlight on the fact that we are fully engaged in a global transformation towards autonomous vehicles, with hybrid cars an industry norm and electric models appearing across models and platforms,” said CARB Chair Mary D. Nichols.

“Our standards need to recognize and keep pace with that market reality to keep California and the nation fully competitive in the global automobile marketplace. The conclusion is inescapable: California’s vehicle future is electric.”

And when fighting the establishment, why not try to take it up a notch at the same time?

CARB recommends going forward, that California double down on regulations considering that the transition to GHG reductions has gone so well.  Earlier in 2016, CARB laid out its "Mobile Source Strategy" document with plans on having 4 million zero emission vehicles on the road by 2030, and to also increase those recent GHG standards just put in place by the EPA.

To read (or attempt to read the full CARB report), one can check it out here.