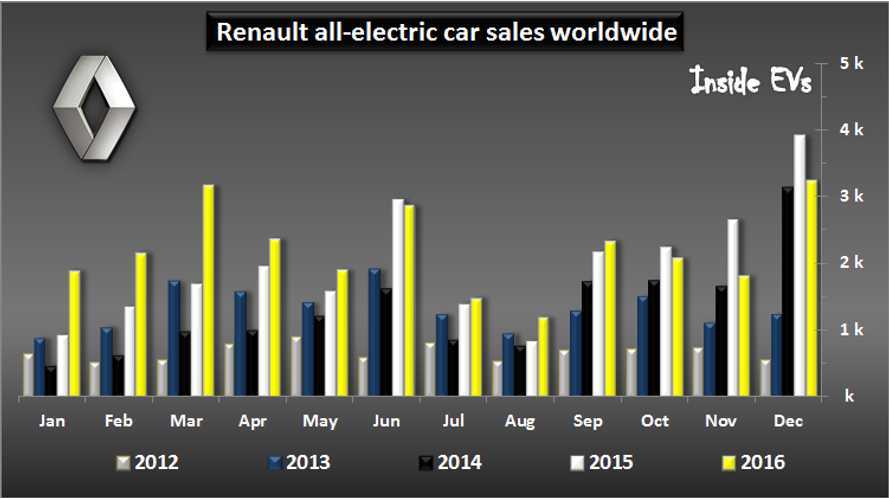 Renault noted a decrease in its all-electric car sales toward the end of 2016 - thanks to the announcement of a new/upgraded ZOE with a 300 km (186 mile) range arriving in January of 2017 depressing Q4 sales, but overall growth from first half of the year was high enough to close the year positive.

If we will compare the 26,000 electric vehicle deliveries with the total 2.49 million Renault sales worldwide, we will see just over a 1% share.

However, as Renault sells its EV mostly in Europe, we likely need to compare the 25,648 EVs sold there with the 1.39 million comparative overall European sales, to get a more accurate reflection of relative market share: 1.8%.

"The Renault brand stays at the top of the European electric vehicles market, with sales up by 11 % at 25,648 units (excluding Twizy). ZOE heads the electric passenger car ranking with 21,735 registrations (up 16%) and Kangoo Z.E. the electric light commercial vehicle market with 3,901 vehicles sold."

As mentioned prior, lower sales in the end of 2016 should translate in the higher sales in 2017, as customers were certainly holding off Renault plug-in purchases waiting on the new 41 kWh ZOE Z.E. offering.