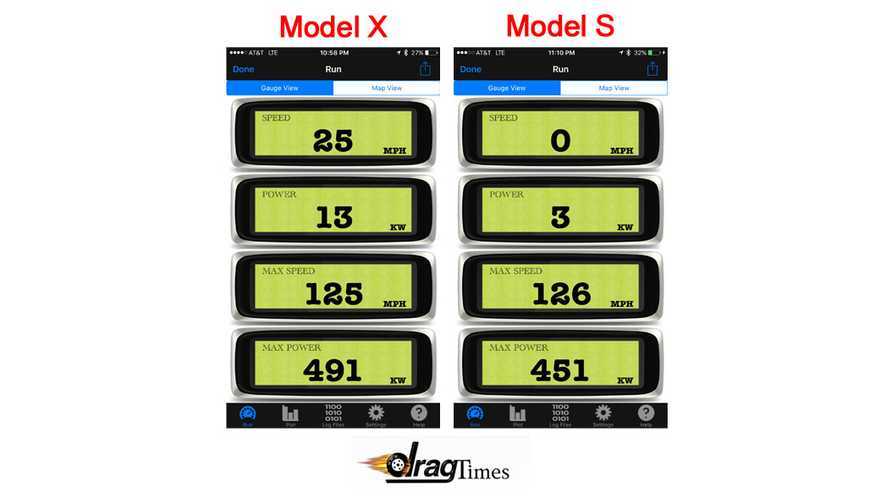 DragTimes was rather shocked by the fact that the X nearly matched the S, despite being less aerodynamic and weighing 600 pounds more.

"Given the extra 600+ pounds the Model X has to carry around over the Model S combined with Tesla’s own spec that both have the same motors, same battery and make the same power (532 HP motor power), the numbers just didn’t add up. While the Model S beats the Model X off the line with 0-60 in 2.8 seconds vs 3.1, after the launch the cars were pretty much even."

On a hunch, DragTimes decided to record live data from both Teslas using the PowerTools App. The result? The X puts out lots more power than the S:

"Using the PowerTools App to stream and record live data from the Tesla to our iPhone we recorded the power output of each car from from 0-125 MPH. The max power output in for the Model X was 491 KW and the max for the Model S was just 451 KW. Converting this to HP results in a 55 HP advantage for the Model X over the Model S. Both cars were charged to 100% with Max Battery Power enabled and ready before the runs."

Why the difference in power, despite the fact that Tesla says both vehicles put out the same? Speculation is all over the place on this one, but the most likely scenario is that the Model X P90D has been fitted with a 100 kWh pack either from the get go or at least for quite some time now, while only the most recent Model S P90D have gotten the 100 kWh pack- meaning only a few, refreshed P90Ds are equal to their Model X brothers.

This seems to be confirmed by the curve plotted by DragTimes in the graph above and further explains what DragTimes discusses below:

"This power difference is pretty significant, especially since Tesla states the Model S P90D Ludicrous runs 10.9 in the 1/4 mile and yet nobody in the year or so the car has been out has been able to run these times at a real drag strip with most runs in the 11.2 -11.3 range. Tesla states the Model X will run the 1/4 mile in 11.7 and we’ve easily beaten that with multiple 11.6 passes. The extra 55HP would most likely put the Model S into the 10’s, so the question is why isn’t the Model S P90D making the power if it’s clear Tesla can make it happen?"

"To further mix things up there have been reports that recently built Model S P90D cars with Ludicrous and later firmware versions than what our car has have been logging 501 KW or 67HP more than older P90D Ludicrous cars. Will a pending software update equailize things and put the Model S into the 10’s, we sure hope so!"

Tesla insists that both the S P90D and X P90D officially put out the exact same power figures, but Tesla's been known to keep secrets right up until it reveals something like a software upgrade-able pack that boosts both range and power.