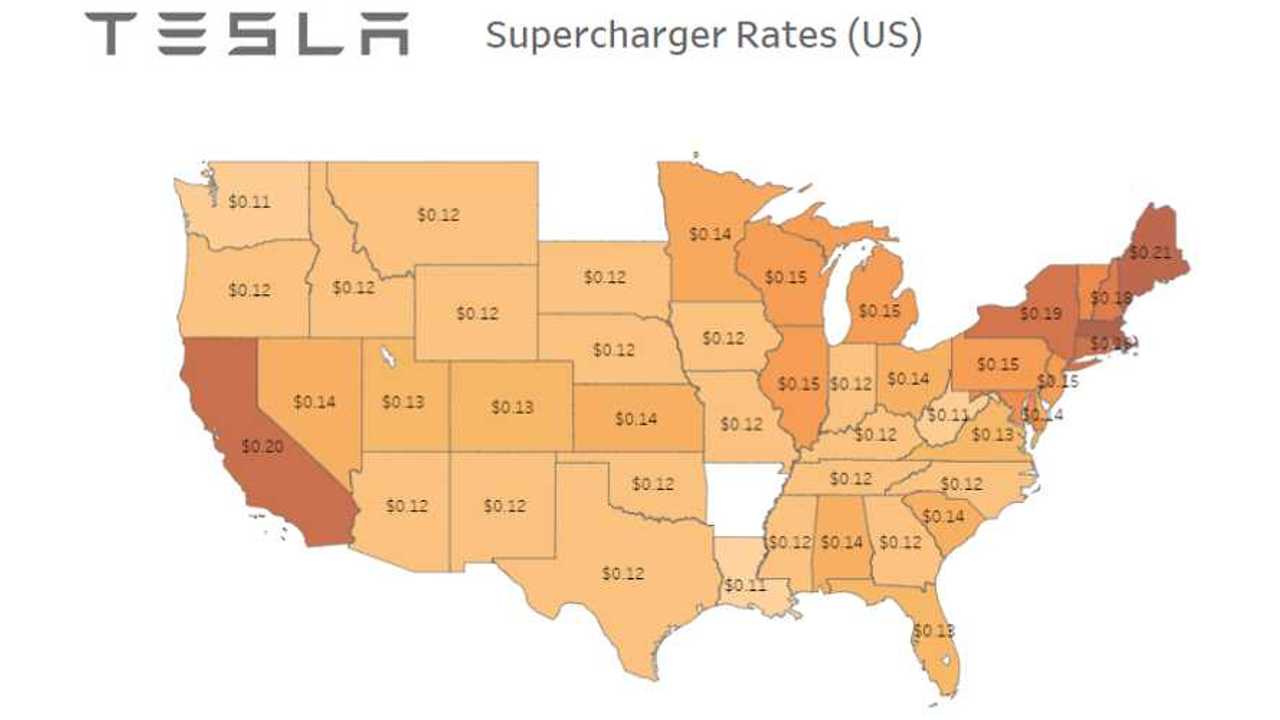 YouTube's Ben Sullins took the time to crunch the numbers and put together a realistic calculator so that we can all figure out how much our trips will cost with the implementation of the new Supercharger Fee Program.

First of all, Tesla gives everyone that purchases a new Tesla vehicle 400 kWh for free. This is only about 1,000 miles, but if you think about the primary reason for Supercharging, it makes sense. People should really be charging their vehicles at home on a daily basis. Supercharging should be reserved for traveling. So, if you go on one average family vacation every year, the 400 kWh should do you well. If you buy a pre-owned Tesla, free lifetime Supercharging is built in.

Ben breaks everything down by Supercharger rates per state, type of vehicle, starting charge, credits applied, and Tier 1 and Tier 2 pricing. He takes you through the whole process on the video, but really if you jump on the calculator below, it's not rocket science.

Tesla finally announced details about the Supercharger costs for new Tesla owners. Any vehicle ordered after January 15th, 2017 will receive 400 kWh of charging per year after which they’ll have to pay a fee. In some countries and states, the rates are per minute where there are two tiers. Once you reach 60kWh of charging the 2nd tier pricing kicks in. Since this can be a bit confusing, and the cost would vary by car, I wanted to try and help people figure out how much a trip might cost.

Visit this link below to calculate your trip. You’ll want to enter the total distance, starting charge, credits available, and car model. The model adjusts the coefficient used in the calculation of the effective rate. That basically takes into account the added cost of charging beyond 60kWh each time you stop. You could offset this if you only ever charge to 60 kWh but the estimate should still be fairly accurate here.

Building the Supercharger Network for the Future (Via Tesla.com):

Tesla created the Supercharger network to make long-distance travel a seamless experience for drivers. Cars have always represented independence and the freedom to travel wherever and whenever people want to go. To enable this freedom, building a charging network that provides quick, convenient, and long-distance travel is critical to the adoption of electric vehicles. One of our top priorities this year is to significantly increase capacity of our Supercharger network.

In November, we announced a change in the Supercharger program that allows us to reinvest in the network, accelerate its growth, relieve congestion, and bring all Tesla owners, current and Model 3, the best Supercharging experience. Tesla Model S and Model X cars ordered after January 15, 2017 will receive 400 kWh (kilowatt-hour) of free Supercharging credits (roughly 1,000 miles) annually on the anniversary of their delivery. We carefully considered current Supercharger usage and found that 400 kWh covers the annual long-distance driving needs of the majority of our owners. As a result, most owners will continue to enjoy the benefits of Supercharging on road trips at no additional cost.

If customers travel beyond their annual credit, they will be charged a small fee to Supercharge. In North America, pricing is fixed within each state or province; overseas, pricing is fixed within each country. In most regions, Tesla owners will pay per kWh as it’s the fairest way to pay for the exact energy used. However, due to local regulations, in several regions we will charge per minute of usage instead, though we are actively working with regulators to update the rules. What’s important is that in every region, Supercharging will remain simple, seamless and always significantly cheaper than gasoline. We are only aiming to recover a portion of our costs and set up a fair system for everyone; this will never be a profit center for Tesla. Customers can just plug in, charge up, and access their charging history on our website.

To put the affordability of Supercharging into perspective, customers will pay about $15 for a road trip from San Francisco to Los Angeles, about $120 from Los Angeles to New York, about €60 from Paris to Rome, and about ¥400 from Beijing to Shanghai.

We are excited to continue the expansion of the world’s fastest and most sophisticated charging network. Additional program details are available here.