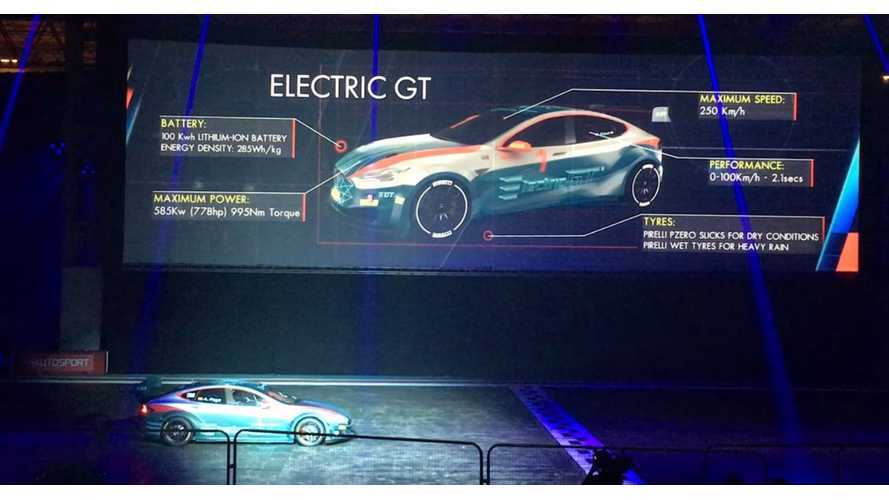 As expected, Electric GT revealed its new Version 2.0 race car in the UK.

Version 2 uses the Tesla Model S P100D as its base, but lots of changes enable the race series car to perform at a much higher level than the standard street-going Model S P100D.

For starters, the interior is stripped out of the Electric GT Tesla. Some of the other mods include suspension changes, upgraded brakes, fitment of slick tires, addition of a roll cage and so on.

Electric GT claims that it's P100D is some 500 kg lighter than stock and that weight reduction, along with slicks and some other mods, allow the P100D race car to zip from 0 to 100 km/h in just 2.1 seconds or from 0 to 60 MPH in ~ 2 seconds flat. Right around the time claimed by Tesla CEO Musk for a stripped-down P100D with Ludicrous +.

Max speed is listed at 155 MPH, but there's no mention of how long the race Tesla can maintain that level of speed. However, from the setup for each race, we can assume the car is capable of doing 40 miles or so (each actual race is approximately 37 miles long) flat out:

“There will be 10 teams and 20 drivers, who will compete across seven races during season one. Weekends will consist of a 20-minute practice session, 60-minute qualifying, a day race (60km) and a dusk race (60km). Each round will be a weekend-long festival of technology and innovation for sustainability, in and around the circuits.”

The race schedule has not yet been disclosed, but we do know that the first event will take place sometime later this year. Races will be held in North and South America, as well as in Europe.