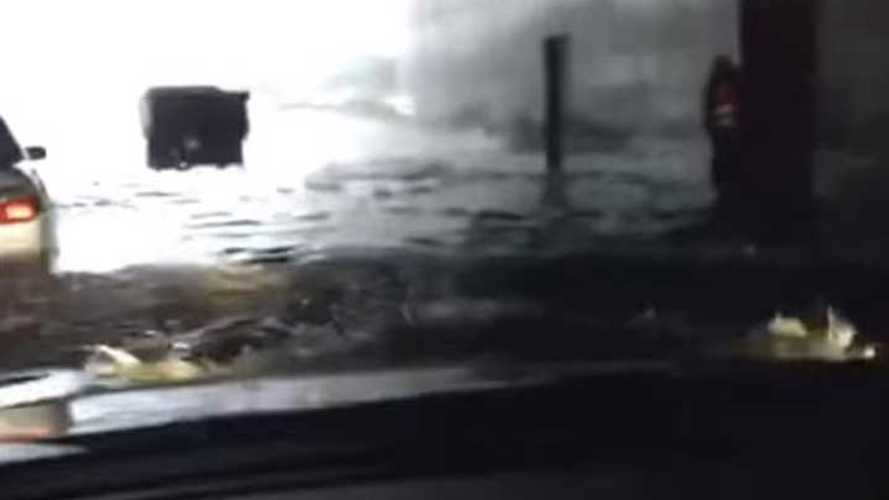 In this recent video (suffering from vertical video syndrome) from Kazakhstan, a Tesla Model S drove or floated past others (mostly assumed to be ICE vehicles) in a flooded tunnel. The car came out the other side intact, at least for the moment.

Getting water in an air intake or exhaust line, or in the battery or other electrical parts is bad news. The Tesla Model S battery and drive units are sealed, meaning water shouldn't be able to enter. Not having an intake may have made a drastic difference. We don't know for sure if the car fared any lasting damage later on, after the incident, but it looks fine upon driving out of the tunnel and "shaking off".

People may think that water can damage an electric vehicle more easily than an ICE vehicle, but that's seldom the case. Every situation is different, and either drive train could fare worse depending on the circumstances. No car should be used as a boat! Insurance policies will rarely help you if you drive your car through deep water.

Fisker lost $30 million worth of vehicles (Karmas) due to the devastation of Hurricane Sandy. Being that the car was marketed publicly as an electric car, people may have been led to think that electric cars suffer more water damage. However, the Fisker was a PHEV and the damage was caused by fires related to the 12-volt battery system, found on most every car on the road today.

We'd like to add that most every electric car is thoroughly tested for water fording, both officially and unofficially. For an unofficial example, check out this video of a Nissan LEAF driving on a flooded road. And here's one of a Volt blasting down a flooded street.