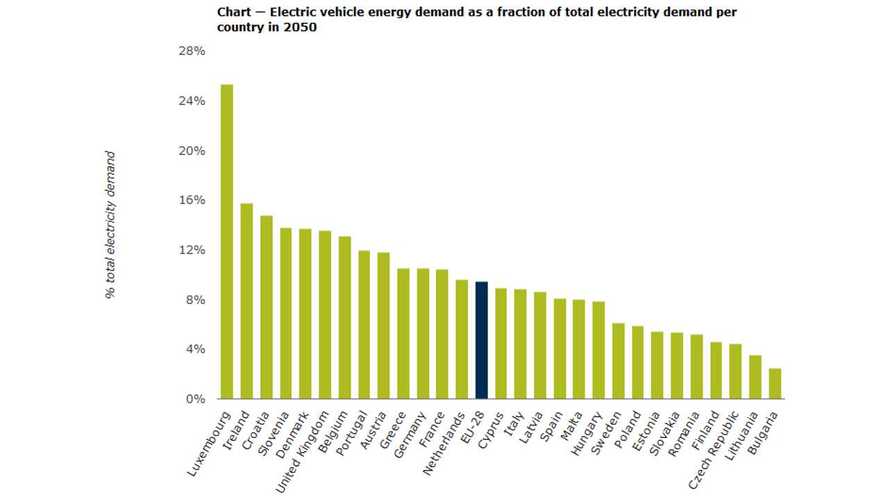 The European Environment Agency (EEA) sees electric cars combined with renewable energy sources as a major leverage point for lowering greenhouse gas emissions, and also a way to the lowering of certain other air pollutants.

However the assessment also notes challenges ahead for Europe's power grid as a result, which may need to increase power generation accordingly.

Assuming EVs would stand for 80% of cars in 2050, electricity demand for EVs in EU would increase to 9.5% of the total demand...which honestly doesn't seem like all that much additional capacity to add over the next ~35 years.

"Several scenarios were explored, including one model where electric cars have an 80% share of the EU's total car fleet in 2050. Additional electricity generation will be required in the EU to meet the higher energy demand. The need for extra power will be higher if other sectors like industry or households do not follow through on planned energy efficiency improvements. The use of renewable energy in 2050 will also have an effect on the level of emissions from the power-generating sector.

Overall, the resulting carbon dioxide (CO2) emission reductions in the road transport sector would outweigh the higher emissions caused by the continued use of fossil fuels in the power-generating sector. In the EU, a net reduction of 255 million tonnes of CO2 could be delivered in 2050. This amount is equivalent to around 10% of the total emissions estimated for that year. However in countries with a high share of fossil power plants, environmental benefits would be lower. This would also lower the benefits of using electric vehicles in these countries.

An 80 % share of electric vehicles would also significantly reduce overall emissions of certain air pollutants like nitrogen oxides (NOx) and particulate matter (PM). For other pollutants such as sulphur dioxide (SO2), emissions could increase due to the continued use of coal in the electricity generation sector.

A larger number of electric cars on the road may pose future challenges for Europe’s power production capacities and put stress on existing power grids. Under the 80% scenario, the share of Europe’s total electricity consumption from electric vehicles would increase from around 0.03% in 2014, to 9.5% by 2050. A more extensive infrastructure providing more public charging points would be key as well as increased power capacity able to handle a larger European car fleet. The assessment stresses that closer coordination between the road transport and energy sectors on policy making and investments will be crucial."

The report "Electric vehicles and the energy sector - impacts on Europe's future emissions" also notes that EVs will benefit from the lowering of CO2, nitrogen oxides (NOx) and particulate matter (PM), while sulphur dioxide (SO2) will probably increase in countries that continue the use of coal.

Electric vehicles powered by renewable energy sources can play an important role in EU plans to:

The growth in electric vehicle use will result in extra energy demand in the European Union (EU-28): Europe's total electricity consumption by electric vehicles will increase from approximately 0.03 % in 2014 to 9.5 % in 2050.

An increase in electric vehicle use will result in: