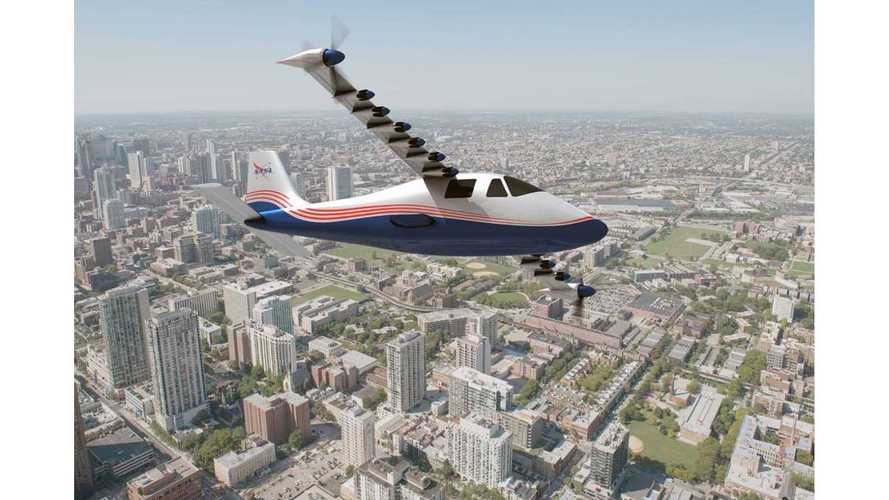 NASA is working on a project called, scalable convergent electric propulsion operations research (or SCEPTOR), to build an electric plane. This could be the first official movement toward emission free flying. The one-seater is called the M-57 Maxwell.

The plane is named after James Clerk Maxwell, the 19th-century Scottish physicist known for his contributions in the field of electromagnetism.

As shown in the picture, the plane has 14 motors that power 14 separate propellers. The wing is very thin, but the additional props provide more air to make up for it. The thinner wings and many small props reduce weight. All 14 motors would be engaged at takeoff and landing, but once the plane is in the air, only two of the small props can keep it cruising.

At this point, the range would only be about 100 miles. This accounts for up to an hour of air time. Just like other electric vehicles, the plane is limited by battery capacity, but in the long term, as technology advances, range will grow. NASA also has plans for electric planes that seat multiple passengers. Matt Redifer, chief engineer for the project said:

“If batteries continue to be on the same rapid increase in energy density that they have been on over the past 10 years or so, one can envision five to 10 years out in the future the battery technology would be such that this particular aircraft could be enabled for a commercial-type aspect."

The project is set to take four years. In step one, NASA will convert a Tecnam P2006T, Italian twin-engine light aircraft, to an all-electric plane. Over the course of time, the plane will be converted to the full-fledged M-57 Maxwell.

NASA's goal is to prove that the 14 motor system is five times more efficient than a standard aircraft. Also, the plane will operate with almost no noise. Commercial aircraft make up 11% of U.S. transportation emissions. With the push for green technology and the issues regarding climate change, the success of NASA's plan could be monumental to air travel and the environment.

Check out the videos below: