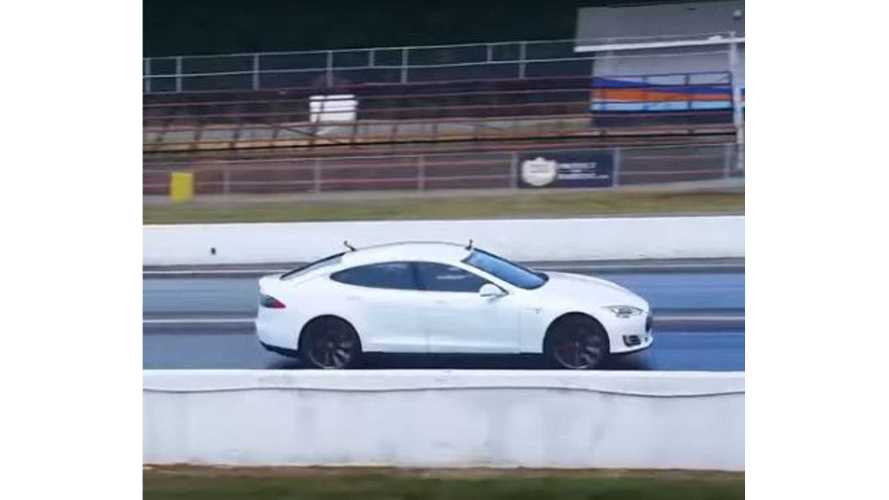 Tesla Racing Channel has become the first to post a sub 2.4-second time (DragTimes record 2.465 seconds during its first 0 60 to MPH attempt) for the 0 to 60 MPH dash in the Tesla Model S P100D with Ludicrous + mode engaged.

In fact, the record time was just 2.389 seconds on a stock Model S. That time makes the production Model S with Ludicrous + even quicker than the stripped down (no interior, hundreds of pounds lighter than a production version) Faraday Future FF 91, which ran a claimed 2.39 seconds according to Faraday.

"First Tesla P100D Ludicrous Plus with the Performance Easter Egg out at the Dragstrip."

Going back to where Tesla Racing Channel began 2 years ago at the famous Piedmont Dragway. We even inserted some clips from our P85D when it did its first pass in insane mode running a 7.4 and a 11.6 quarter mile."

"Fast forward two years from then and this car now is a full second faster in the quarter mile running 10.6s show room floor stock. That's an achievement not accomplished by possibly any car company before improving their top model by a full second e.t."

"This car even put down a 2.38 0 to 60 at the dragstrip, murdering the Faraday Future and its hype."

2.38 seconds would be a record for a production electric car, had it been conducted in an official manner, but that's still nothing compared to the expected 2.1-second time the Model S P100D with Ludicrous + mode could run if it was stripped of its interior and extra unnecessary items.

"With the wait finally over the Performance Easter Egg, Ludicrous Plus, for the Tesla P100D is here. Elon has tweeted it should run 0-60mph in 2.4 seconds! What car even compares to that?? And what we're really excited about is the 10.6 quarter mile time. In this video we do a few tests to see if we can get the acclaimed acceleration times with the new update!"

"At the end of the video I simply wanted to address a few things such as the traction problem with these crazy cars along with the ability to improve you get into launch control. Crazy these things are now a full second faster in two years from the P85D to the P100DL +!"

"And yes I know the Roadster was the first Tesla Produced...Please excuse the error, it was locker room talk."