Plug-Ins Take Nearly 4% Of The Subcompact Sales In The U.S. 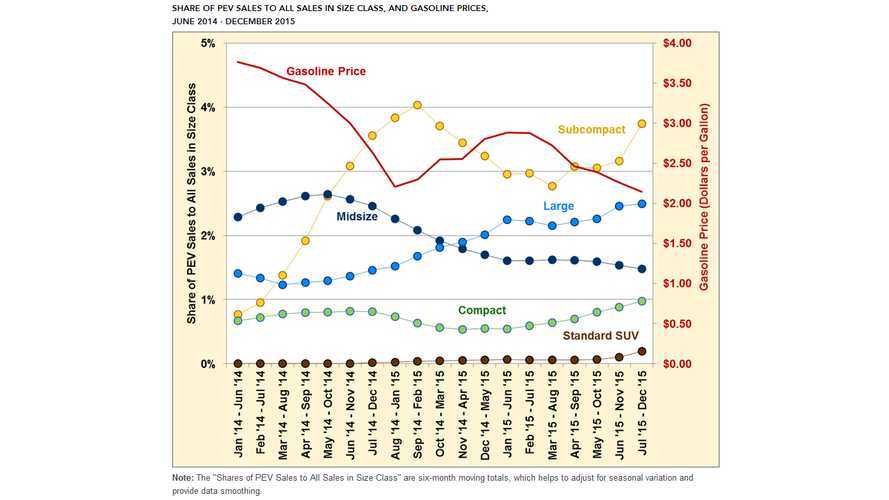 According to the DOE Office of Energy Efficiency & Renewable Energy, in some vehicle categories, plug-in vehicle's market share is already at 1-4%.  Mostly due to the plug-in offerings that are available at this time.

Subcompacts are closing in on a 4% share, while Compacts are reaching 1%. Large and midsize cars are at around 2.5% and 1.5% respectively.  (full charting below)

There was no real plug-in SUVs on the market, but with introduction of Tesla Model X, also this category should grow this year to decent levels.

The DOE, as always, tracks the price of gas alongside EV sales, but as we have maintained in the past, the price of gas has little bearing on the ups and down of plug-in sales at this point.  But rather it is the depth of the plug-in offerings, and the viability of those models to market demand, that moves the sales needle at this point.

"Monthly plug-in vehicle (PEV) sales are small in comparison to total vehicle sales, but PEV sales shares are growing within some size classes.

Looking at six-month moving totals, subcompact PEV sales were 4% of all subcompact sales from September 2014 to February 2015 and after an early-year decline rose to 3.7% by late 2015 despite falling gasoline prices. Large PEV sales were 1.4% of all large car sales in early 2014, but rose to 2.5% by the July to December 2015 period. The compact car and standard SUV categories posted overall gains during this timeframe. Midsize PEV sales, which include the Nissan Leaf, fell from a high of 2.6% of all midsize sales in mid-2014 to 1.5% by December 2015."