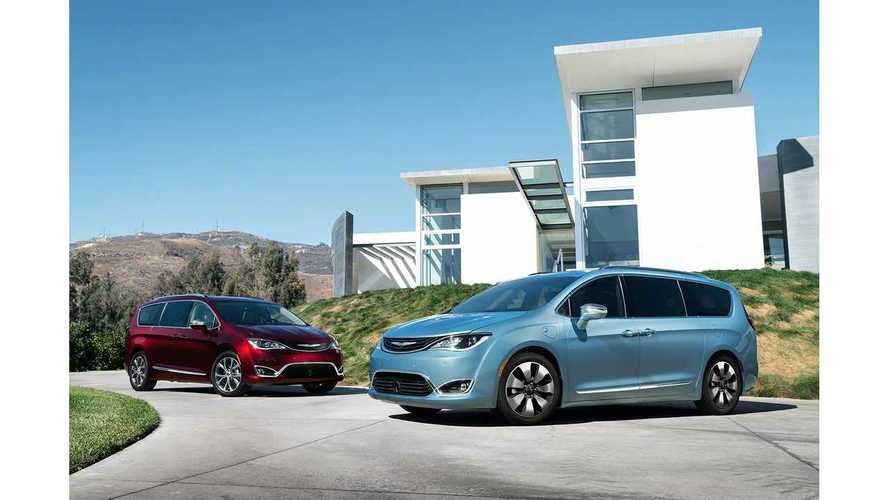 Reid Bigland, President and CEO, FCA Canada, joins Kathleen Wynne, Premier of Ontario, at the FCA Canada Automotive Research and Development Centre (ARDC) in Windsor, Ontario, on June 15, 2016. The Government of Ontario announced that it will provide up to $85.8 million in funding to FCA Canada to support enhanced research at the ARDC, plus advanced training at the FCA Windsor Assembly Plant.

FCA Canada secured $85.8 million ($66.6 million USD) from the Ontario government, for its contribution in the local economy.

Part of the funding will support the Windsor Assembly Plant (WAP)'s production of the plug-in Chrysler Pacifica Hybrid.

FCA has sold some 14.3 million minivans over the past 30 years, and we are eager to see how the 6th generation minivan - Chrysler Pacifica will be received on the the market, especially as it relates to the electrified version.

The Chrysler Pacifica Hybrid (which in fact is a plug-in hybrid version) will offer about 48 km (30 miles) of all-electric range.  On paper the plug-in Pacifica ticks all the right boxes when it comes to North America's appetite for a more utility-based, people hauling EV.  The issue of course is pricing...which is unknown at this time.

It is assumed that the base plug-in model's MSRP (or Pacifica Hybrid if you will), will begin at (or just north) of the most expense petrol trim level.

A first-of-its-kind Canadian partnership between industry and academia, the ARDC opened in 1996. What started as a $30 million investment has grown to a $1 billion spend on vehicle research and development. The ARDC plays an important role in the product development of nearly every vehicle produced by FCA.

At today’s event, Premier Wynne announced that the Ontario Government will provide up to $85.8 million in funding to FCA Canada to support enhanced research at the ARDC, plus advanced training for the world-class workforce at the Windsor Assembly Plant (WAP) and technology enhancements related to the production of the all-new Chrysler Pacifica Hybrid.

As the industry’s first electrified minivan, built for the world exclusively at WAP, the 2017 Chrysler Pacifica Hybrid will deliver an estimated range of 48 kilometres (30 miles) solely on zero-emissions electric power."

"This significant investment builds on FCA’s commitment to the province and its competitive advantages in Ontario, namely a high-quality workforce and innovative R&D."

"Today, the ARDC employs 180 people and covers 93,000 square metres in its Windsor facility near WAP and within close proximity to the U.S. border. The facility performs rigorous testing that includes millions of kilometres of road test simulation, extreme weather testing, corrosion control and precision night-time headlight testing, to name a few.

In addition to design and engineering, the ARDC works with leading universities in Ontario, such as McMaster, Waterloo and Windsor, conducting research on critical challenges for the industry, including advance powertrains and light-weighting. Results from these efforts can be found in the 2017 Chrysler Pacifica Hybrid.

Additionally, a unique relationship has been forged with Italy’s Politecnico di Torino and the University of Windsor on the establishment of a dual-degree automotive engineering program. Over the years, the ARDC has mentored more than 500 students, many of which have become employees of the facility."

“It’s no surprise that Fiat Chrysler chose Ontario for the production of its first-ever minivans using plug-in hybrid technology. Ontario is a global leader in the auto sector, with competitive business costs, a highly skilled workforce and a commitment to sustainable innovation. We will continue to work with the auto industry, including our partners in Detroit, to support and encourage investment, employment and innovation in the industry.”

“In the last 18 months, FCA has invested in excess of $2 billion and added over 1,200 new jobs for the benefit of our Canadian operations. We are grateful for the support of the Ontario government and appreciate our strong working relationship. We are proud of our world-class workforce, the new research capabilities of the ARDC and the exciting new Chrysler Pacifica.”

“Collaboration between academia and industry is at the heart of innovative clusters around the world. The University of Windsor is proud of its 20-year partnership with FCA Canada in ARDC, the country’s largest automotive research centre. As at every university and college in Ontario, we have researchers and creative minds that want to bring solutions to the challenges and opportunities that our province’s industries are navigating. We are very grateful to the many ways in which the province is supporting that goal."