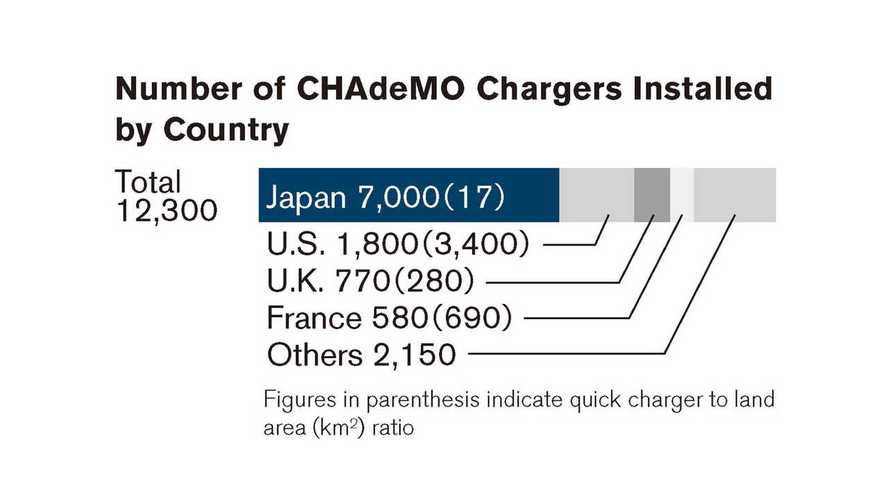 In the second EVolution newsletter to date, Nissan presented its thoughts on the fast charging infrastructure in Japan.

Japan is home turf for the CHAdeMO DC charging protocol, and as such is the nation's standard, with some 7,000 points (1 per 17 km2) in operation as of June 1st.

Nissan says that the infrastructure has now reached "critical mass" and that drivers have no issues keeping their EVs charged.

According to Nissan, the number of QC units in Japan (mostly ranging from 20 kW to 50 kW) has increased 20-fold since the launch of the Nissan LEAF in December 2010.

Many of the recently installed chargers were subsidized under a special government project, accompanied by manufacturer investments.

"In December 2010 when Nissan LEAF was launched, there were only 312 quick chargers installed in Japan. By the end of April 2016, that number had increased twenty-fold to around 6,200 at some 7,000 locations nationwide. The Ministry of Economy, Trade and Industry supports the development of charging infrastructure through a subsidy program started in 2012. In the last couple of years, installation of new quick charging infrastructure has accelerated, spreading to highway service and roadside rest areas, parking complexes, and convenience stores.

It is now fair to say that charger availability has reached critical mass in Japan. For everyday use, most EV drivers encounter no difficulty keeping their vehicles charged. Moreover, the number of charging spots continues to increase.

Japan's success in building such an extensive network this quickly is attributable to several factors. First, from the outset the nation adopted a unified standard, called CHAdeMO. Another factor is that Japan prioritized the installation of quick chargers. Today about 60% of all quick chargers worldwide are in Japan. A third factor is charging station density. At current figures, the density of installed chargers is quite high compared to other countries. The nationwide reach and high density of the charging network are reasons Japan is said to be one of the world's most advanced countries in charging infrastructure readiness."

The second part of the newsletter consists of an interview with the Osamu Niikura on the topic.  Mr. Niikura is Nissan's General Manager of EV Operations, Global EV Division.

"Q: How has Nissan contributed to the expansion of Japan's charging network?

Developing a safety net that gives drivers peace of mind and an en-route charging network for travelling.

From the outset, Nissan believed in building EV society by taking a holistic approach. This required us to consider not only how to design and manufacture vehicles, but also how to contribute to the charging network, battery recycling, V2H (Vehicle to Home*), and so forth.

Installing chargers at Nissan dealerships and developing support programs for owners of Nissan EVs were activities we could undertake ourselves. But building the infrastructure that would enable EV society to flourish required teamwork with other key players. In 2012 together with Sumitomo Corporation and NEC, Nissan has established Japan Charge Network (JCN). After that in 2014, seven companies including four car manufacturers, Nissan, Toyota, Honda, and Mitsubishi Motors, along with the Development Bank of Japan (DBJ), Tokyo Electric Power Company (TEPCO) and Chubu Electric Power launched Nippon Charge Service (NCS), a limited liability company tasked with making Japan's charging network more convenient for users. EV drivers can have access to all chargers in the network with a single membership card.

*With a dedicated EV supply system, Nissan LEAF can serve as a power source for the home

In the beginning the relationship between EVs and charging infrastructure was a matter of chicken and egg. But the synergy of four leading carmakers working together to launch NCS, government subsidies, and support programs for businesses that installed chargers grew the network to some 7,000 installed chargers. Although we are not content to remain at this figure, we have at last escaped the chicken-and-egg situation. From now on, we must pay attention not only to the total number of units installed but also their actual usage. For example, we should determine optimal location for chargers based on frequency of use while targeting both the busiest areas and the lowest density areas for the installation of more chargers.

EVs should be considered an electrical product. Since the power grid is already in place, all we need to do is increase the number of safe well-constructed power outlets. Also, since we can assume that EV battery capacity will continue to increase, we must be ready with high-power chargers that will shorten charging time.

Q: What effect will energy deregulation have on the charging environment?

Fostering a healthy and stable system where each person pays for the amount of energy they use.

Since each service provider will have its own plan, we cannot say exactly how energy deregulation will impact the EV environment. But we can foresee advantages both for businesses that offer charging services and for EV owners. Deregulation enables EV users to choose the energy provider that offers the most cost-effective plan. This will encourage the development of new services, which should benefit EV users. EV owners who live in houses and charge at home are also free to select the plan that best matches their needs. As the business of charging services advances and we start to see chargers installed in places such as coin parking lots, I expect that people living in apartment buildings will have much more interest in owning EVs.

People will feel more freedom to own and enjoy driving EVs once more charging spots come on line. Energy deregulation is an opportunity. Already we envision a sustainable growing future where each person properly pays for the energy they use."