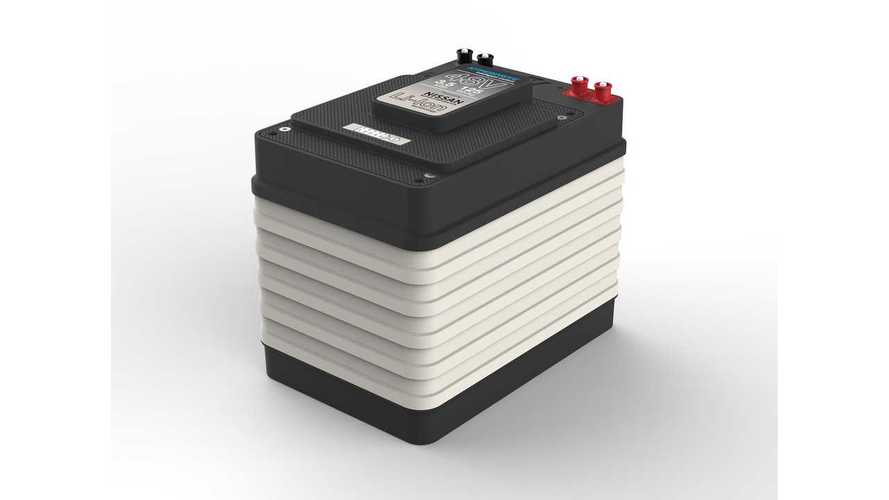 Six years after the LEAF's introduction, and also launching own its own lithium-ion battery production (together with NEC), Nissan has now become a battery supplier itself.

British Hyperdrive Innovation has announced the launch of battery products using Nissan's lithium-ion cells via the automakers's Sunderland plant in the UK.

Hyperdrive's plan is to offer batteries for various applications, from energy storage to 3rd party electric and hybrid vehicles.

The offering presented is a 3.5 kWh battery pack (48 V and 125 Wh/kg), which looks to be the equivalent of seven (original) LEAF modules (and also as the UK plant does not make the newer 30 kWh cells).

"Hyperdrive Innovation today became the first company to secure the supply of Nissan’s LEAF lithium-ion battery technology for its own commercial products.

The company is incorporating the Nissan-developed, UK-made new and used battery modules in its new intelligent battery systems which can be deployed by manufacturers to power electric and hybrid electric vehicles, as well as providing energy storage for off-grid and back-up utility supplies."

"The first battery packs are currently being fitted into a number of niche, off-highway vehicles and scalable energy storage for both domestic and commercial markets."

“Making the Nissan LEAF technology available to ambitious UK businesses could have a major impact on the economy. Resurgent UK car manufacturers for example would have to spend millions of pounds to develop their own electric vehicle batteries. The ability to acquire world-leading technology and engineering support via Hyperdrive instead could give UK car manufacturers a significant head start in the race to deliver commercially successful electric vehicles.”

“The commercial availability of this technology is also an enabler for homeowners, businesses and network operators to expand their energy storage capacity. For homeowners this means storing the energy they generate from renewable systems such as roof-based solar panels and for businesses it will bring operational benefits, energy cost savings and grid continuity.”

“As part of our Intelligent Mobility strategy, Nissan is committed to exploring new technology-powered solutions for our customers that go way beyond the electric vehicle itself.

“With the launch of the Nissan LEAF in 2010, we pioneered the EV market and we have worked consistently since to advance our battery technology so that we remain at the forefront of the sector. Hyperdrive’s new product will give customers and business owners the flexibility and power to control how and when they use energy and we are delighted to be sharing our battery technology and expertise to power this solution.”