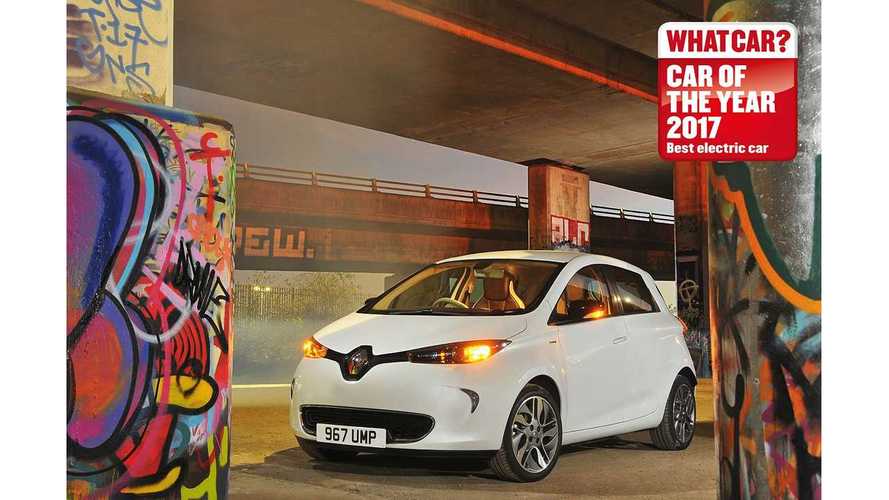 The Renault ZOE once again shines at the What Car? Awards in the UK, receiving the title of Best Electric Car under £20,000 for the fourth consecutive year.  We suppose this means one of two things:

A) the ZOE is a really great EV offering or, B) the competition is really terrible.

The ZOE also won the Best Electric Car overall, and was a finalist for the Technology Award.

As compared to previous years, it was easier to receive the accolade for the 2017 edition because of the new battery upgrade found in the  ZOE ZE 40, which increases the real world range of the car to a very impressive 300 km (186 miles).

"The Renault ZOE, fitted with the new Z.E.40 battery,  has been recognised for the fourth consecutive year by What Car?  as ‘Best Electric Car’, as well as ‘Best Electric Car for less than £20,000’ at an awards ceremony in London yesterday evening. The new ZOE which was also a finalist in the Technology Award provides almost double the previous storage capacity, delivering a 250-mile range (NEDC) whilst retaining fast charging times at an accessible price."

Commenting on the decision to award the ZOE for a fourth consecutive year, Steve Huntingford, Editor, What Car? said:

“Given the rate of progress in this class during the past 12 months, this win shows just how much this recent update has improved the ZOE. Renault has kept everything that was already great about the ZOE: its practicality, tidy handling and standard kit.

Plus, while range is up dramatically, price isn’t. And to include many of the latest comfort and infotainment features as well as fast charging at this price makes the ZOE a truly brilliant all-rounder.”

“The new 2017 model year Renault ZOE now delivers the best range of any mainstream electric vehicle which, along with interior and exterior upgrades, continues to prove that zero emissions vehicles can be stylish, practical and comfortable. We’re delighted that What Car? has recognised the ZOE’s talents for the fourth year in a row by naming it their best electric car of the year.”