Infographic: The Renault-Nissan Alliance in Europe 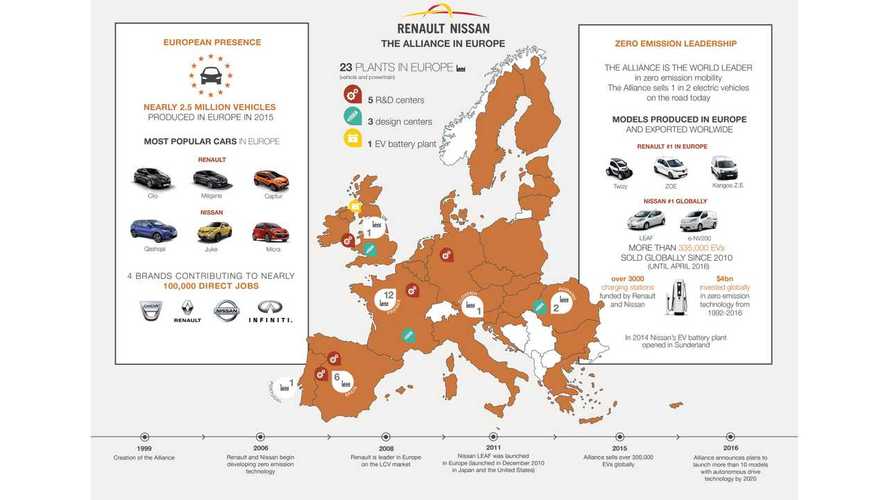 The Renault-Nissan Alliance highlights its presence in Europe with new infographic, as well as updates on Euro sales from its 6 (5 current offerings) all-electric cars cumulatively.

Lead by the Nissan LEAF and Renault Zoe, the Alliance has sold more than 335,000 EVs through April of 2016.

Expressed as a percentage, or by market share, electric vehicle sales aren't that large, but the Alliance is still the regional market leader with half of the BEVs market.

The Renault ZOE is top all-electric model with growing perspective in Europe, while the Nissan LEAF is also strong and of course is the leader in worldwide sales.

Renault Kangoo Z.E. and Nissan e-NV200 still really don't have any competition among commercial electric cars, so therefore control most of the market, as small as it is.

The Renault-Nissan Alliance was also the first and only OEM to launch a volume lithium-ion battery cell manufacturing site in Europe alongside a production line.

Past strong sales, we should note the one characteristic that separates the Renault-Nissan Alliance from all other traditional OEMs currently marketing plug-ins - supporting infrastructure.  Like in Japan and the US, the Alliance has funded the installation of more than 3,000 stations.