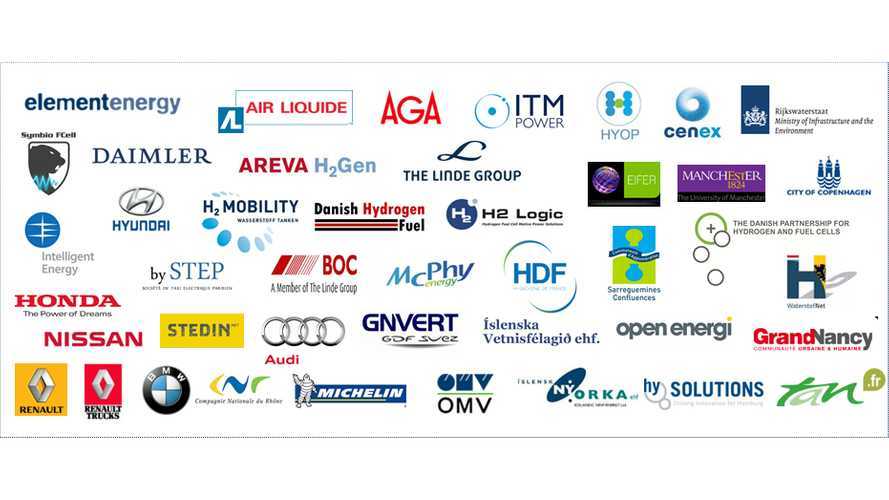 The project that brings together 37 partners (interestingly Toyota seems to be absent this time).

The plan for the H2ME 2 is to install additional 20 new hydrogen-refueling stations (HRS) and deploy 1,230 fuel cell vehicles over six-years.  Apparently €135 million ($152M USD) doesn't get you a lot in the fuel cell game (or very quickly).

Previous H2ME project from 2015 started with a goal of 29 refueling stations and 300 fuel cell vehicles.

"Today sees the launch of a second pan-European deployment of hydrogen refuelling infrastructure, and passenger and commercial fuel cell electric vehicles. The six-year H2ME 2 project brings together 37 partners from across Europe.

It will include the deployment and operation of 1,230 fuel cell vehicles, the addition of 20 extra hydrogen-refuelling stations (HRS) to the European network and will test the ability of electrolyser-HRS to help balance the electrical grid.

The project has been developed under the auspices of the Hydrogen Mobility Europe (H2ME) initiative and supported by the Fuel Cells and Hydrogen Joint Undertaking (FCH JU) with funding from the European Union Horizon 2020 programme.   The H2ME 2 project takes its name from Hydrogen Mobility Europe (H2ME), a collaboration between national H2 Mobility initiatives from across Europe which aims to coordinate European activities and helps support the early roll-out of hydrogen vehicles across Europe.

The H2ME 2 project will complement and build on a first FCH JU-funded project developed by H2ME partners, H2ME 1 (www.H2ME.eu), which was announced in September 2015, with plans for 300 fuel cell vehicles and 29 HRS. Together, the H2ME projects will form the largest EU funded project for hydrogen mobility and FCEV deployment.

The €100 million H2ME 2 project, funded with a further €35 million grant from the FCH JU, will significantly expand the European hydrogen vehicles fleet and in so doing, aims to confirm the technical and commercial readiness of vehicles, fuelling stations and hydrogen production techniques. H2ME 2 will produce recommendations and identify any gaps that may prevent full commercialisation, as well as collating results to support future investments.  Together the H2ME 1 and H2ME 2 projects demonstrate the breadth and depth of the commitment to hydrogen-fuelled road transport as a pan-European solution to the need to have viable, competitive, alternatives to fossil fuels."