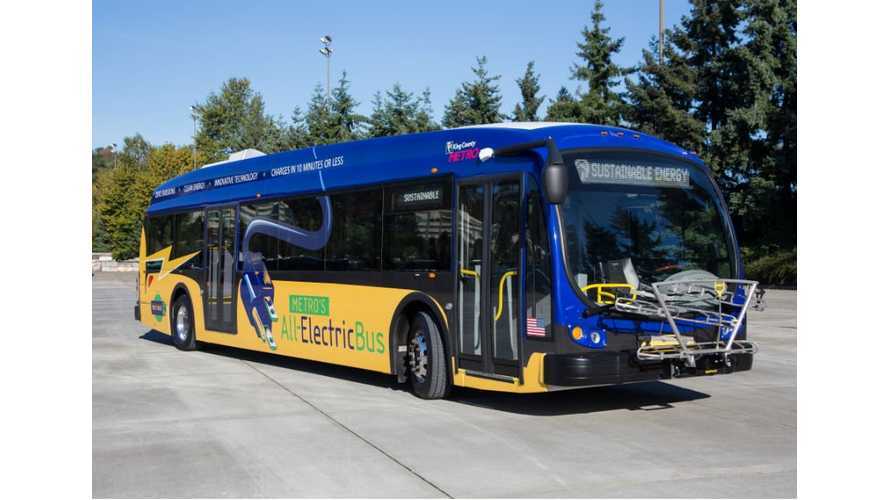 In total, 120 battery-electric buses are to be purchased by 2020. It's already confirmed that up to 73 of those will be supplied by Proterra.

Cost of 73 Proterra buses is estimated at up to $55 million, with the first 8 Proterra eBuses to be delivered this year.

"Fulfilling his commitment to the greening of King County’s fleets, King County Executive Dow Constantine announced today that King County Metro will purchase up to 73 all-electric battery buses from Proterra at a cost of up to $55 million, starting with 20 buses totaling $15.12 million. Charging stations to support the initial orders of those buses will range from $5.5 million to $6.6 million."

King County Metro Transit previously had tested three Proterra buses, and also a fast charging station (enabling a 10-minutes recharge),  so we figure trial that must have went off fairly well.

Beside Proterra fast charging buses, King County Metro Transit is also ordering long-range buses (with a range of about 140 miles) from various other manufacturers.

"The 40-foot battery buses have an estimated range of about 25 miles, with a quick charging time of just 10 minutes.

Maintenance costs of all-electric buses are expected to decline versus hybrid-diesels, primarily because they have fewer moving parts.

Eight of the buses are slated to go into service this year; 12 more in 2019. Up to eight of the new 40-foot battery buses will likely operate on Metro Routes 226 and 241 in Bellevue. As part of a pilot project last year, Metro began running three all-electric buses on these routes, which serve some of the county’s densest job centers, including the Microsoft campus and downtown Bellevue.

As part of today’s announcement, Metro will acquire up to nine long-range electric buses from different manufacturers to test the battery technology with a range of about 140 miles. With this approximately $7 million acquisition, Metro is challenging the industry to produce buses that can travel farther. Metro also is calling on the industry to develop 60-foot long buses, better able to replace the articulated buses that make up 55 percent of its fleet.

Metro is a leader in clean technology. It was the first transit agency to adopt diesel-electric hybrids, and it currently operates more than 170 electric trolley buses. By committing to replacing its current fleet with clean vehicles, Metro is influencing the development and expansion of the all-electric bus market.

"From our electric trolley bus fleet to building the nation’s largest diesel-hybrid bus fleet, King County has long been an innovator in clean vehicle technology. Now, we’re dramatically expanding our zero-emission electric buses and working with the industry to innovate and offer next generation vehicles that move people quietly and cleanly while helping meet our climate goals."

"King County is well on track to meet our greenhouse gas emissions goal in our Metro bus fleet. These new battery buses will multiply our ability to protect our climate and clean air in King County."

"King County Metro’s decision to purchase up to 73 Proterra battery-electric buses not only represents a significant milestone for mass transit in the U.S., but also a resounding victory for the clean transportation industry as a whole. Already a model for the new generation of sustainability-minded transit agencies, King County Metro continues to demonstrate its commitment to exceptional service, environmental action, and technological innovation. We look forward to supporting them as they deploy our industry-leading Catalyst buses across their expanding ridership base."

"To better serve our customers, we want battery buses that travel longer distances and can carry more people. We’re committed to expanding our battery bus fleet, and need the industry to accelerate development of standardized battery bus charging systems so they can work flexibly for any bus route, and also build high-performing 60-foot-long articulated buses – which serve as the transit workhorses in King County."