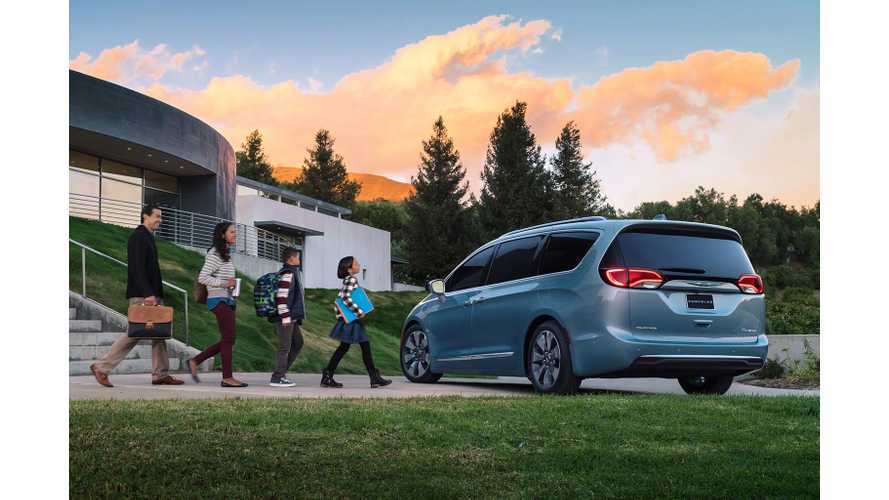 The Chrysler Pacifica Hybrid is the most fuel-efficient minivan ever, rated at 84 MPGe by the EPA, and as one might expect, the vehicle also holds lowest GHG emissions in its class.

The plug-in hybrid version of the Pacifica reduces GHG emissions by 21-metric-tonne (or over 31%) over first 120,000 miles of operation compared to previous generation according to Chrysler; amazing what a 16 kWh van and a 33 mile all-electric range can do for you!

"The improvement was calculated by FCA US engineers who used industry-standard software. The software determines Global Warming Potential (GWP), which considers the environmental impact of fuel production and delivery, along with the implications of the vehicle’s own fuel consumption.Such calculations are based on 120,000 miles (200,000 km) of operation. And improvements are measured by contrasting anticipated C02-equivalent greenhouse-gas (GHG) emissions, with those of comparable vehicles.

C02-equivalent, or CO2e, is a term for describing various greenhouse gases as a common unit. For any quantity and type of greenhouse gas, CO2e signifies the amount of CO2 that would have the equivalent effect on global warming.

Compared with the previous-generation Chrysler minivan, the all-new Chrysler Pacifica Hybrid – having traveled the prescribed distance – could account for a 21-metric-tonne reduction in CO2e GHG emissions.

Expressed other ways, a 2017 Chrysler Pacifica Hybrid’s potential emissions-savings are equivalent to:

The difference between a plug-in Pacifica Hybrid and its conventional gasoline-powered stablemate is 24%, despite the fact the batteries makes the van some 650 lbs heavier.

More energy dense batteries in the future will of course provide even better results.

"The Pacifica Hybrid delivers a 24-percent reduction in GWP, when compared with its gasoline-powered stablemate. This despite a curb-weight differential that favors the 2017 gas-powered Pacifica by approximately 650 pounds.

Such disparities are inherent in hybrid-vehicle production, largely because of the need to accommodate large battery packs. And such accommodations often trigger additional carbon emissions.

However, the Pacifica Hybrid’s unique powertrain helps offset the effects of added weight. It features a specially adapted version of the award-winning 3.6-liter V-6 engine, mated to a dual-motor, eFlite electrically variable transmission.

This advanced technology helped the 2017 Chrysler Pacifica Hybrid minivan achieve a fuel-economy rating of 84 miles-per-gallon-equivalent (MPGe) from the U.S. Environmental Protection Agency (EPA). No minivan has ever been rated higher."

The Chrysler Pacifica Hybrid is expected to arrive by the end of January.