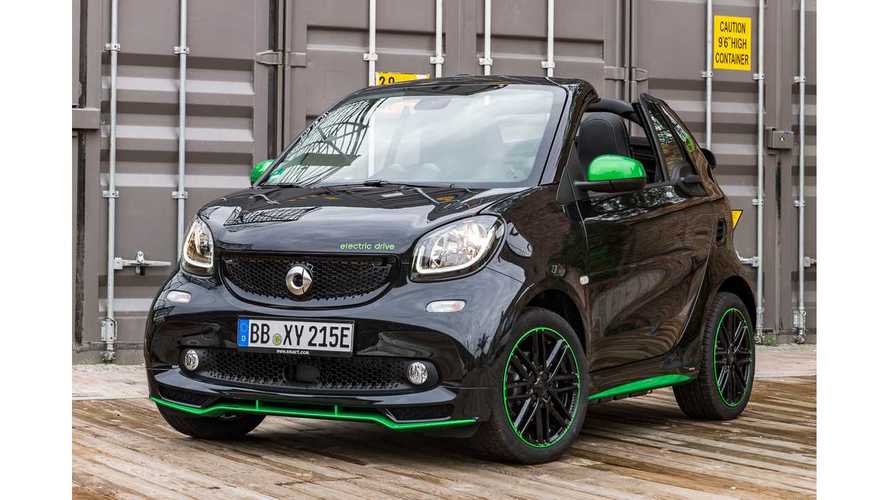 Daimler has released details on the new 2017 smart Electric Drive ahead of its official debut later this month at the Paris Motor Show.

And for the first time, the plug-in models will stretch across the entire brand lineup: the Fortwo, Fortwo Cabrio and Forfour.

While the US won't see the four seat model, Daimler says that the ForTwo ED will launch in the US this December, while Europe will gets full lineup in early 2017.

"The smart is the perfect city car, and with electric drive it becomes a little bit more perfect", says Annette Winkler, Head of smart.

"This is why we will soon be offering our entire range – smart fortwo, smart cabrio and even our smart forfour – as all-electric versions. Together with lots of smart fans and enthusiastic drivers of the three predecessor generations, we are looking forward to the unique driving fun offered by the new smart electric drive. And at very attractive prices, especially in countries where there is a buyer's premium".

The 2017 smart ForTwo ED comes equipped with a 17.6 kWh battery, which has to be a disappointment to anyone familiar with the EV already, as the battery is the same size as found in today's plug-in smart.

Daimler states that the new smart ED will travel up to 160 km/100 miles (NEDC), which is a 10% improvement over the current generation in Europe; translating that to a real world/EPA metric, the 2017 smart ED will get about 75 miles of range as compared to the 68 miles found in the first generation model.

The smart ForTwo Cabrio and ForFour model range is stated at 155 km/96 miles.

Some stats on the ForTwo Electric Drive:

Thanks to a new 7.2 kW Level two charging ability, the smart Electric Drive can now be charged in 2.5 hours (over the previously agonizing 5.5 hours), while a 110V wall charge will take 13 hours.

No DC fast charging option is available in the US, but 22 kW AC will again be available in Europe at some point in 2017 - allowing for a 45 minute charge.

All the smart lineup is produced at the company's Hambach plant, with batteries still via Daimler subsidiary Deutsche ACCUMOTIVE.

The new smart ED adds some new features, like remote climate control to pre-condition the car while still plugged in.  Also more "smart control" applications are on board, such as intelligent charging, two programmable charge timers.

And as always, smart is offering a "fancy" trim for those who really want to let others know they are driving something a little different.

Gallery (below):  More shots of the 2017 smart Electric Drive lineup

No words for this