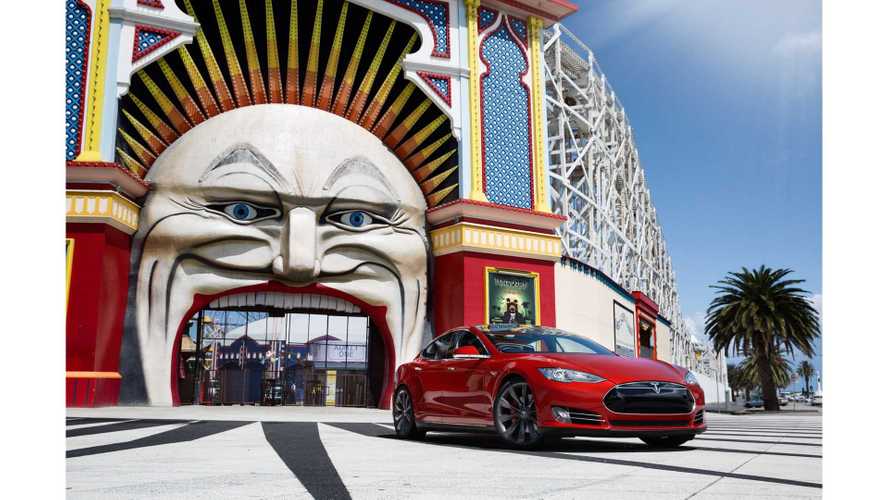 Tesla informed owners in Australia via email that the Supercharger route from Melbourne to Brisbane is officially ready. The company added three stations to complete the 1,000 mile corridor.

The stations include "The Big Banana" in Coffs Harbor, "Motto Farm" in Heatherbrae, and "Macadamia Castle" in Knockrow. Tesla still has some work to do at the Coffs Harbor station, but for now it has two temporary Supercharger units. The other two locations are complete, with six permanent stalls each.

Tesla will have eighteen stations in OZ by the end of 2017, as long as plans come to fruition. Currently there are eleven functional stations on the continent, and two more in the construction phase.

All stations in OZ are 150 miles or less apart, so that all current and future Tesla models will be able to traverse the continent without issue. Construction of a station across the country, in Perth, is planned to happen before the close of the year.

Australia claims home to one of the largest and most upscale Tesla stores in the world, as of now. Also, Australia has made news repeatedly for its adoption of Tesla's energy products.

We’re excited to announce that Tesla has expanded its Supercharger Network to complete the Melbourne to Brisbane route with new stations in Heatherbrae, Coffs Harbour and Knockrow now in operation.

The new stations in Heatherbrae and Knockrow are equipped with six charging bays and are available to use 24/7. The Mobile Supercharger Unit in Coffs Harbour has two bays and will be replaced by a permanent station at a nearby location in the near future.

A Tesla Supercharger can add up to 270 km of range in just 30 minutes of charging. Superchargers are designed for city to city travel, allowing owners to travel for about three hours, take a quick break, and get back on the road charged up.

Discover more Tesla charging stations below to begin planning your next road trip.