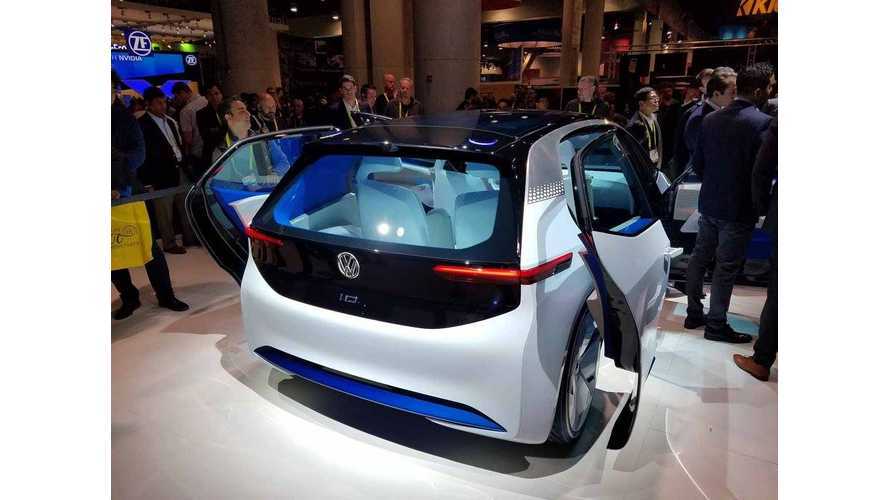 According to Volkswagen director for sales, Jurgen Stackmann, electric vehicles will fast become mainstream, and Volkswagen is taking note. As most of us know, VW is beginning to showcase its new I.D. family of electric vehicles, and Stackmann says that an electric GTI is in the cards.

Company execs spoke at NAIAS in Detroit this week, for the announcement of the new Volkswagen I.D. Buzz (microbus MPV). Volkswagen shared that it is forecasting the sale of one million EVs by 2025. All these cars will be from the I.D. line, which will include a Hatchback release in 2020, the Buzz in 2022, and an SUV down the road.

Additional concepts will also come forward during the course of the next several years. Stackmann shared:

"One million looked at today is an optimistic view, but the view I have is very different. The technology will get acceptance if the whole package is accepted ... EVs will become fascinating when they become affordable, are cool, sexy cars, and you will want to be seen in one. They'll be cool cars that people will want to have and be seen in ... When customers see the infrastructure, the interest is generated. It needs work but people want it to happen."

Stackmann said that an electric GTI has a place in the lineup. However, it will be a different GTI than we know today. Conversely, VW has made it clear that, while the vehicles will be state-of-the-art, there is no intention to stray too much from the norm. Stackmann doesn't believe in strange or weird vehicles, that may turn off consumers, and not allow for future innovation. He said:

"If they are too radical you lose momentum for the next step."

He also pointed out that even though VW is pushing the I.D. name for the upcoming electric family, it is not set in stone. He likes it and its seems that consumers do as well. But, VW is not solidifying anything at this point. Stackmann added:

"We're getting familiar with the name and it has scale and room for interpretation, the reaction is extremely positive and it's a crisp, cool name. We'll see. Conceptually it's a good idea."

The one thing that VW is making solid though is its commitment to electric vehicles. Stackmann made it clear that the EV family will be high volume and not treated as a niche. He explained:

"We have to offer a fun, usable and meaningful way of transportation. We can't be niche and have to be relevant and generate scale for the technology. It can't be for the few, we need scale."

He concluded that regardless of any details, the GTI fits in the EV family perfectly. Really, it only makes sense.