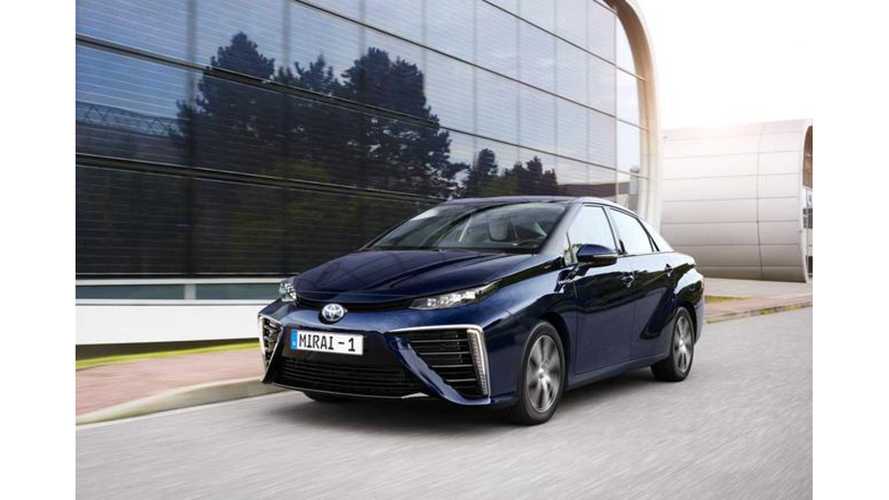 But with that said, there are generous incentives to bring the price down to entice buyers to get behind the wheel of Toyota's fuel cell vehicle:  a $8,000 federal tax credit, a $5,000 California state rebate and something called "Trailblazer purchase support" from Toyota worth $7,500.

Taking all those factors into account, leasing starts from just $349 per month for 36 months with $2,499 due at signing.

So far in the US, Toyota has delivered over 700 Mirai in the U.S., but of those, more than half the sales were registered in August as the Japanese company ended the staggered roll-out of the Mirai due to earlier infrastructure concerns in the state, 371 were sold in August.

While there almost no changed for the 2017 Mirai, it will abe offered in one more additional color - Atmospheric Blue (on top of previous Celestial Black, Elemental Silver and Nautical Blue Mirai).

Toyota Mirai out for a spin

Toyota's Press Blast on the 2017 Mirai below:

"Toyota Mirai drivers – COME ON DOWN!! While drivers may not see the trailblazing Toyota Mirai fuel cell vehicle in a game show showcase anytime soon, they can see every day value in new model year pricing. Toyota Mirai 2017 model year offers competitive, flexible pricing options and the opportunity to be a part of automotive history.

The Mirai hydrogen fuel cell electric vehicle combines hydrogen and oxygen to make electricity onboard, while emitting nothing but water vapor. It is a zero emission vehicle with an EPA estimated driving range of 312 miles, and refuels in around five minutes.

MY17 MSRP remains $57,500 plus an $865 destination fee. Mirai customers also may qualify for an $8,000 federal tax credit and $5,000 potential California rebate along with access to the coveted California HOV carpool lane.

To recognize our Mirai drivers leading the way, qualified customers will be eligible for the Mirai trailblazer support program. The trailblazer program enhances the purchase and ownership experience with the following choices:

The Mirai comprehensive, ownership experience remains unchanged for MY17, boasting a range of world class services, including:

California customers can request a Mirai by visiting www.toyota.com/mirai. Production of the Mirai is limited and vehicles will be placed with select, eligible customers. After placing a request, potential Mirai drivers are contacted directly by a Toyota representative to discuss ownership and next steps.

The seven complimentary days per year will expire after each year and any unused days will not carry over.

Covers normal factory scheduled maintenance and is valid only at authorized Mirai Fuel Cell dealers in the continental United States. See dealer for details and exclusions.

Does not include parts and fluids.

Trip reimbursement covers interruptions that require the Toyota dealership to keep such vehicle overnight and such Covered Vehicle is at the time of such disablement more than fifty (50) miles from the residence of the owner of the Covered Vehicle. See an Authorized Mirai Fuel Cell dealer for details and exclusions"