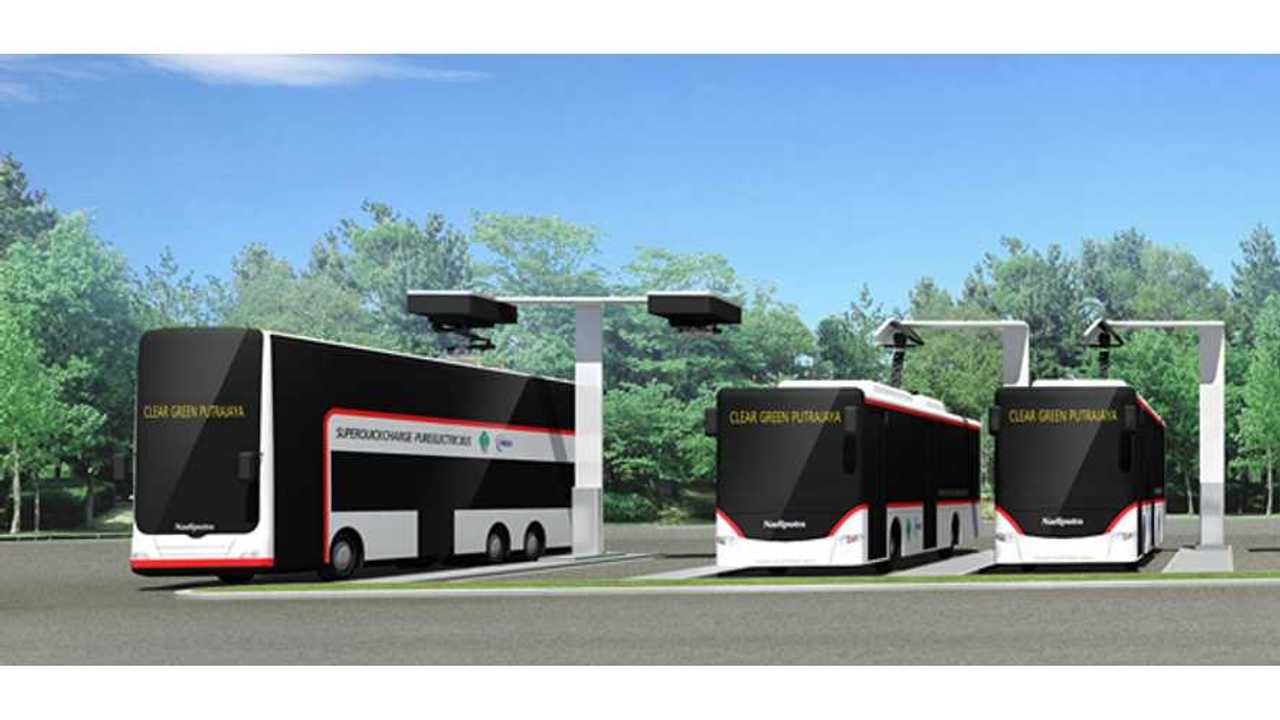 To be fair, electric buses with fast charging capability aren't news these days, but besides employing standard transit buses, there will be also be full-size double-decker buses.

NEDO states that thanks to the use of right-sized electric batteries, full-size electric double-decker buses will be on par with diesel ones.

In fact, two double-deckers will be equipped with batteries that can be recharged in 10 minutes many times over, which clearly indicates why Toshiba SCiB is involved in the project.

Because double-deckers are higher, roof-charging stations also will need to be higher, adding a new dimension of incompatibility with running other standard electric buses alongside.

Objectives of the Demonstration

Putrajaya, the center of Malaysia’s administrative government, where Green City 2025 is being promoted as part of its urban strategy, is an ideal city to showcase EV buses in Malaysia and the ASEAN region. From this viewpoint, NEDO and the city of Putrajaya agreed to collaborate on a project to demonstrate EV buses and concluded a memorandum of understanding (MOU) in July 2015. The objective of the project is to demonstrate a super rapid charging system and the long service life of storage batteries from FY2015 to FY2019, with the aim of creating a smart urban transportation system having improved efficiency.

NEDO succeeded in developing a large double-decker EV bus capable of performance that is at the same level as a diesel vehicle. This was possible due to the use of optimal capacity storage batteries and high-power charging technologies which make ten-minute charging possible. With the cooperation of the city of Putrajaya, NEDO is carrying out the world’s first demonstration using two of these buses. The project is being conducted in collaboration with four Japanese companies: Toshiba Corporation, PUES Corporation, HASETEC Corporation, and Oriental Consultants Global Co., Ltd. Malaysian bus operator Putrajaya Bus (PAPSB) is also participating in the project.

Utilizing Japanese technologies and working together with local companies, NEDO aims to contribute to Malaysia by establishing an EV hub among ASEAN countries. NEDO will also showcase the project and plan for wide-area deployment of urban transportation package projects.

NEDO and the city of Putrajaya agreed to expand their collaboration by amending the memorandum of understanding (MOU) for the demonstration project on June 3, 2016.