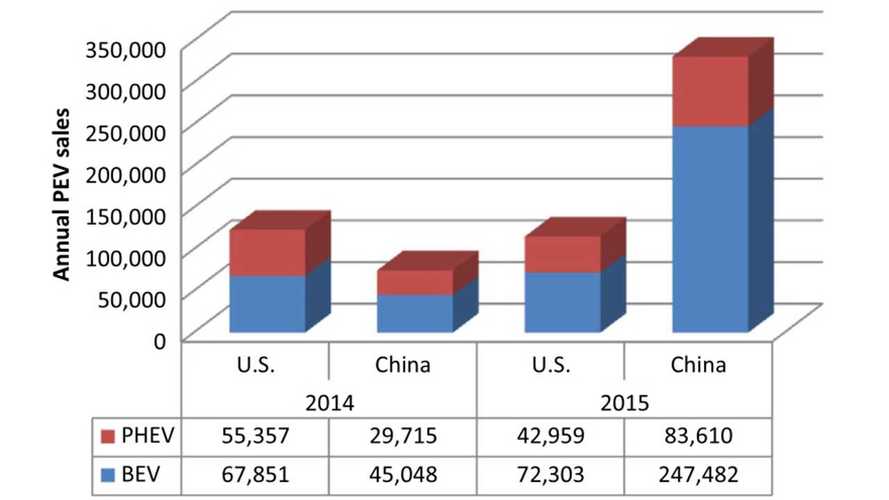 Strong subsidies are being linked to a massive increase in plug-in electric vehicle sales in China in 2015.

"Sales of plug-in vehicles (PEVs) in China—battery-electric and plug-in hybrid—suddenly soared 343% in 2015 to about 331,000 units—more than 3 times the number sold in the US that year. China-based BYD is now the world’s leading manaufacturer of PEVs, jumping ahead of Nissan and Tesla. Six other China OEMs are among the top 20 PEV manufacturers."

As the graphic (above) shows, China blew away the U.S. in 2015, despite being beaten by the U.S. one year prior.

There was a study conducted by a team from the Institute of Transportation Studies at UC Davis and CATARC (China Automotive Technology and Research Center) to determine why sales increased so dramatically. The results of the study were just recently published in trade journal Energy Policy.

Here are some of the findings from the study (via Green Car Congress):

One of the leads for the research team commented on the findings too:

"The scale of subsidies in 2015 in China was massive."

"The central government provided a much as US$8.4 billion—about 10x that in the US."

"Central and local financial incentives amounted to up to $16,000 per car."

Should we expect to see similar growth for 2016 and beyond? The short answer is not as the team of researchers concluded:

"continued sales growth is threatened by persistent regional protectionism, the unsustainability of these large subsidies, and widely reported cheating by some automakers."

"China’s mix of government policies has been successful in increasing PEV sales. However, the scale and magnitude of monetary and non-monetary support is unsustainable."

Unsustainable indeed...in fact, China has already acted to reduce subsidies from 2017 on and hopes to basically eliminate subsidies by 2020.