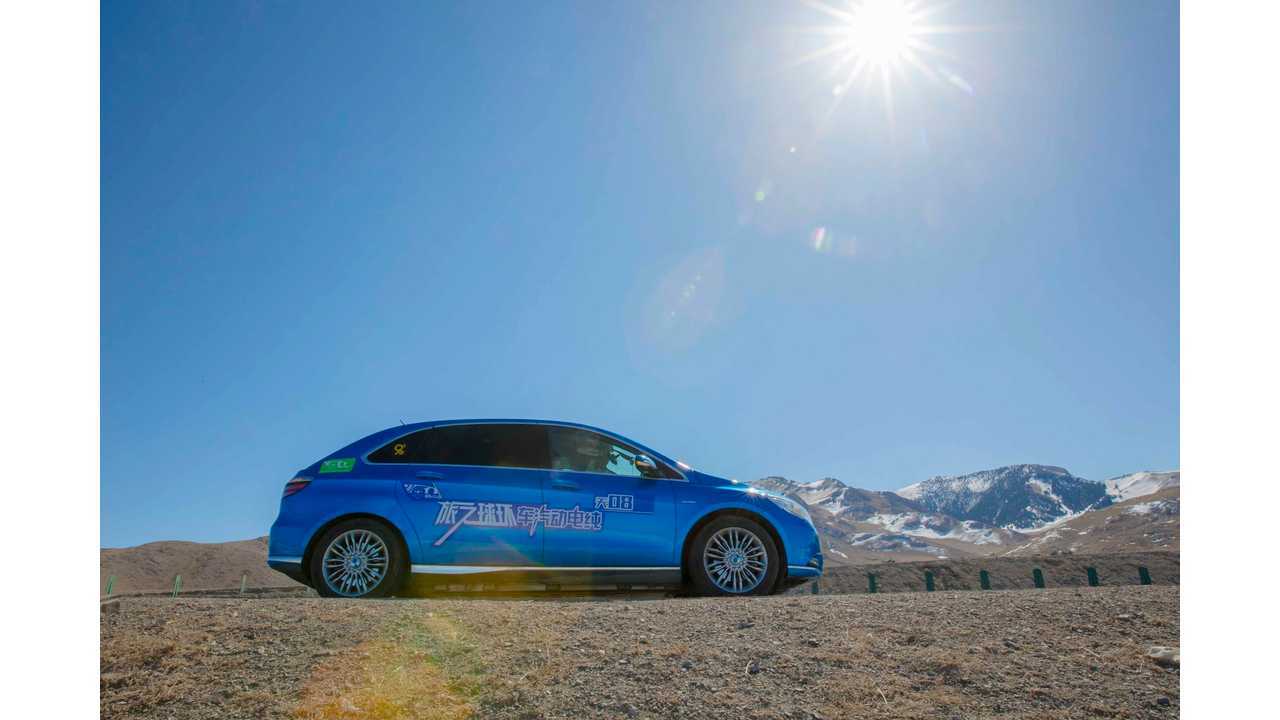 Andrew Yi Zong, a Chinese businessman and philanthropist, announced his participation in the upcoming 80edays - an Around-the-World Electric Vehicle Rally - in a Denza electric car.

80edays China Team seems to be the only entry in a non-Tesla EV (beside one electric bus) and it will be probably the only opportunity to see the Denza EV in U.S. (June-July) or Europe any time soon.

Denza (JV between Daimler and BYD) states over 300 km (180 miles) range is possible in the EV.

Zong previously built China’s first private electric car charging network between Beijing and Guangzhou to get his own Tesla Model S home to Guangzhou. A serial entrepreneur, Zong will be sharing insights of his proven Fission Startup Method, which empowers employees to lead new business ventures, at select events on the East and West coasts of America when the 80edays ELDURO EV rally brings him to the United States 23 June-10 July.

The route for the 80edays ELDURO pure electric vehicle rally will take the 11 multinational teams across Europe, Asia, and North America, demonstrating that EV technology is ready for people around the world to seriously consider when buying their next car.

As well as demonstrating his commitment to a cleaner planet, 80edays China Team pilot, Andrew Yi Zong, CEO of PHNIX ECO-Energy Solutions, one of the world’s largest heat pump manufacturers in China, is paving the way for the ideals of the Chinese dream with his innovative Fission Startup Method. The Fission Method, a democratic election system that allows outstanding employees to run new business ventures or become shareholders, has led to the creation of 10 spin-off companies in 10 years."

"Andrew Yi Zong will be presenting his Fission Startup Method during the “Global Disruptors Speaker Series” of events being held on the East and West coasts of the United States between 23 June and 10 July, dates and locations to be announced. For more information and to register for these events, visit phnixproducts.com/80edays."

“Chinese citizens, like Americans, are striving for a better life and many have aspirations to run their own businesses. The Fission Method makes it possible for employees to become shareholders in the company they work for and even choose the leader by investing their own money to participate in the election process. Through an exciting internal selection contest, employees vote for the best candidate, who also pays to be a contender, and the person with the most votes becomes the general manager of the new company.”

Rafael de Mestre, creator of the 80edays Challenge, crossed the globe in 2012 in a Tesla Roadster in 127 days said:

“Andrew is a perfect candidate to captain an 80edays team because he cares passionately for the planet and he’s so enthusiastic about electric vehicles. He’s also in the unique position to take more than two months off to drive around the world because of his astute business acumen that empowers his employees to manage the businesses in his absence, which is key to why we selected him to represent China.”