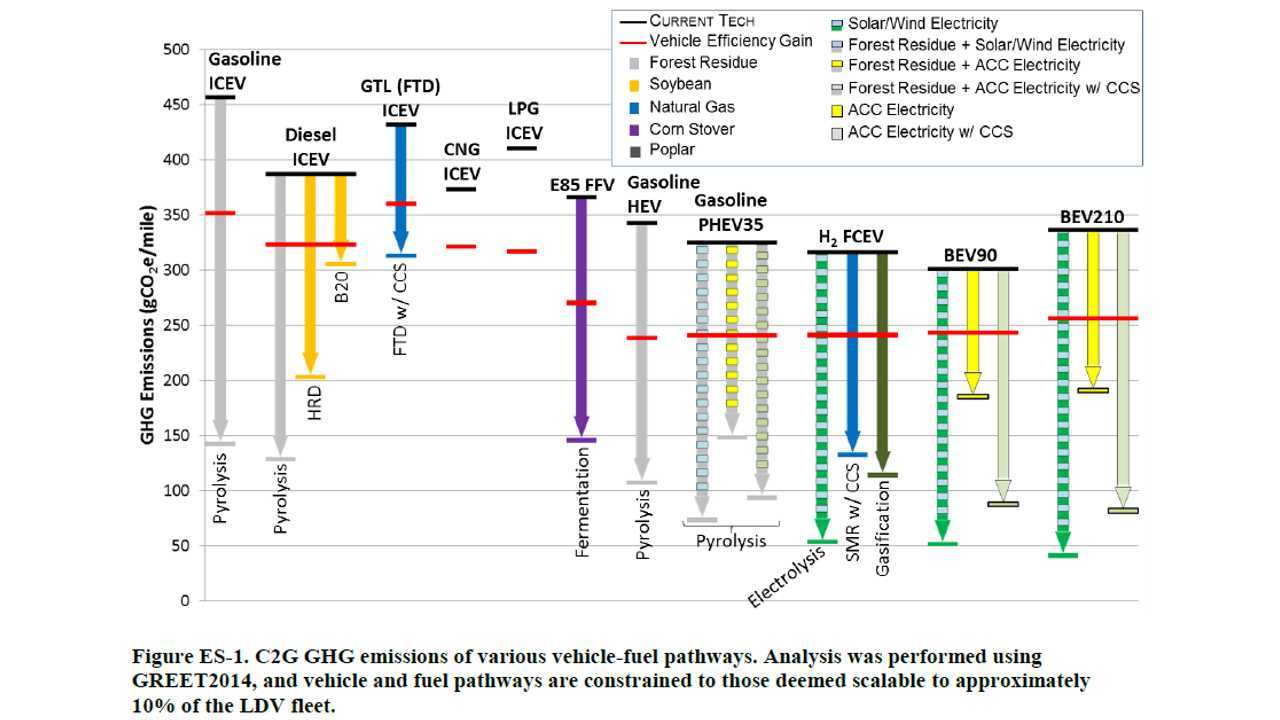 Findings on all-electric cars (with estimated 90 and 210 miles range) and hydrogen fuel cell cars, says these vehicles can lower GHG emissions to some 50 g CO2/mile, provided the electricity will be 100% renewable of course (solar/wind).

However, the authors of the report believe that most of the advance technologies with the greatest potential are also the most costly...while at the same time, that even conventional gasoline/diesel cars can go below 150 g CO2/mile (although volume application of such a result is unlikely).

The following observations are drawn from this report:

• Large GHG reductions for LDVs are challenging and require consideration of the entire lifecycle, including vehicle manufacture, fuel production, and vehicle operation.

Cost: • High-volume production is critical to the viability of advanced technologies. • Incremental costs of advanced technologies in FUTURE TECHNOLOGY, HIGH VOLUME cases are significantly reduced, reflecting estimated R&D outcomes. • Low-carbon fuels can have significantly higher costs than conventional fuels. • Vehicle cost is the major (60–90%) and fuel cost the minor (10–40%) component of LCD when projected at volume. Treatment of residual vehicle cost is an important consideration. Many alternative vehicles and/or fuels cost significantly more than conventional gasoline vehicles for the CURRENT TECHNOLOGY case, even when costs are projected for high-volume production.

Technology feasibility: • Significant technical barriers still exist for the introduction of some alternative fuels. Further, market transition barriers – such as low-volume costs, fuel or make/model availability, and vehicle/fuel/infrastructure compatibility – may play a role as well.

Limitations: • AEO 2015 data for prices of crude oil, gasoline, and diesel fuel used in the CURRENT TECHNOLOGY case differ from subject data reported for early 2016. Because these data are different and because they are among several factors considered in this analysis, the calculated CURRENT TECHNOLOGY LCD for gasoline and diesel and the CURRENT TECHNOLOGY cost of avoided GHG emissions for the other alternative pathways relative to gasoline would be different if 2016 prices were used. One of the consequences of using AEO 2015 data for the CURRENT TECHNOLOGY cases is that the prices of crude oil, gasoline, and diesel fuel used in this report are 40–50% higher than actual market prices for those products in the first quarter of 2016 (the time this report was written). This report examines current fuel costs in greater detail in Section 9.4 and Appendix F. • This study evaluated GHG emissions and cost of individual pathways and assumed common vehicle platforms for comparison. The cost estimates in this study are subject to uncertainties due to their projection at both high- and low-volume production for the CURRENT TECHNOLOGY case and their dependence also on technology advancement for the FUTURE TECHNOLOGY case. Furthermore, market scenario analysis should build on this pathway analysis to explore the realistic potential of the mix of different pathways to achieve GHG emission targets in different regions.