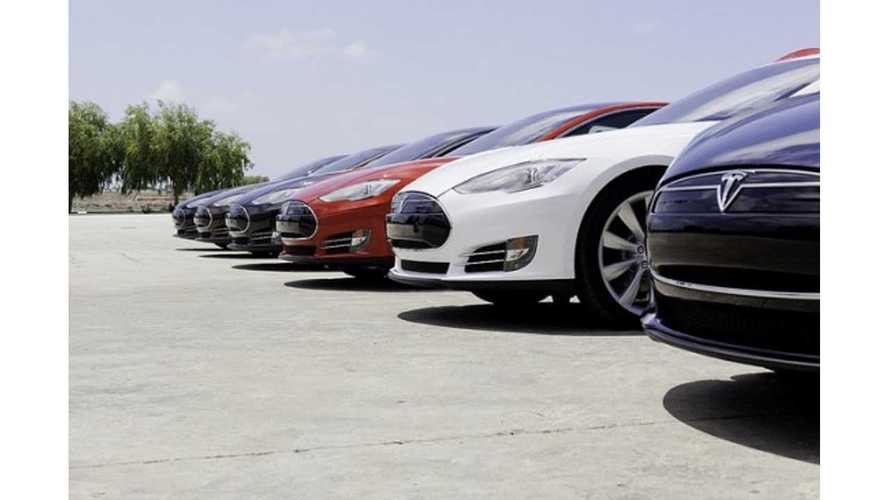 Yesterday, the Internet blew up with erroneous stories claiming that there's a safety defect related to the Tesla Model S' suspension.

It all started when the Daily Kanban published a scathing anti-Tesla article (imagine that) that recounts the story of ONE Model S owner who suffered a suspension failure due to "very abnormal rust" on the ball joint. That owner recounts his story here.

Update: Details added below as Tesla made an accusation on the use of the Model S in question that was not accurate, and has also reportedly revised its NDA agreements to clarify that it does not preclude speaking to the NHTSA about any potential safety issues.

Regardless of the fact that just one Model S was involved, the media took this as a chance to pounce on Tesla. Some outlets even went so far as to inaccurately report that the NHTSA had opened a formal investigation into the matter. That's simply not the case. However, the NHTSA is reviewing this one case (as it does with most every legitimate case), but there's no open investigation, nor is there a "preliminary evaluation" even available from the NHTSA at this point in time.

If you check out the NHTSA's site at this link, you'll notice that there are several front suspension complaints listed. However, most of the listed complaints have a location posted as "Unknown" and/or no listed VIN. This would lead us to believe that the same individual is posting all or at least most of the complains onto the NHTSA's site. Here's an example of two such complaints:

Adding more drama to the story is the fact that Tesla is/and has been aware of the potential issue. The automaker issued a Technical Service Bulletin on the matter back in March 2015. The TSB can be found in its entirety here.

However, it was the Daily Kanban's cover-up claim that really got the ball rolling. According to the Kanban article, Tesla tried to quiet this single Model S owner by making him sign a non-disclosure agreement (NDA). But in fact, Tesla did no such thing. Instead, what Tesla did was have the owner sign a Goodwill Agreement, which the automaker explained like this:

"When our customers tell us something went wrong with their car, we often cover it even if we find that the problem was not caused by the car and that we therefore have no obligations under the warranty. In these situations, we discount or conduct the repair for free, because we believe in putting our customers’ happiness ahead of our own bottom line. When this happens, we sometimes ask our customers to sign a “Goodwill Agreement.” The basic point is to ensure that Tesla doesn’t do a good deed, only to have that used against us in court for further gain. These situations are very rare, but have sometimes occurred in the past."

Update (June 10, 2016):  Despite earlier statements (above) suggesting the "Goodwill Agreement" was A-OK, Tesla is now revising its nondisclosure agreements (via WSJ) and working with the NHTSA to address public concerns that its NDA could be interpreted to indeed discourage owners from reporting any potential safety problems.

The owner in this specific case (Pete Cordaro) says that he never took the original agreement to mean he could not speak to the NHTA, saying.

"I never thought this prevented me from talking to anyone"

With the false accusations on the defect now flying around on the Internet, Tesla had no choice but to issue a response, which is posted in its entirety below:

A Grain of Salt

A few things need to be cleared up about the supposed safety of Model S suspensions:

First, there is no safety defect with the suspensions in either the Model S or Model X. Since we own all of our service centers, we are aware of every incident that happens with our customer cars and we are aware of every part that gets replaced. Whenever there is even a potential issue with one of those parts, we investigate fully. This, combined with extensive durability testing, gives us high confidence in our suspensions. With respect to the car that is discussed in the blog post that led to yesterday’s news (more on the blog post below), the suspension ball joint experienced very abnormal rust. We haven’t seen this on any other car, suggesting a very unusual use case. The car had over 70,000 miles on it and its owner lives down such a long dirt road that it required two tow trucks to retrieve the car. (One to get the car to the highway and one to get it from the highway to the service center.) When we got the car, it was caked in dirt.

Second, NHTSA has not opened any investigation nor has it even started a “preliminary evaluation,” which is the lowest form of formal investigatory work that it does. On April 20th, as part of what it has told us it considers “routine screening,” NHTSA informally asked us to provide information about our suspensions. On April 30th, we provided all relevant information to NHTSA. NHTSA has since told us that we have cooperated fully and that no further information is needed. Neither before nor after this information was provided has NHTSA identified any safety issue with Tesla’s suspensions. This can be confirmed with NHTSA.

Third, Tesla has never and would never ask a customer to sign a document to prevent them from talking to NHTSA or any other government agency. That is preposterous.

When our customers tell us something went wrong with their car, we often cover it even if we find that the problem was not caused by the car and that we therefore have no obligations under the warranty. In these situations, we discount or conduct the repair for free, because we believe in putting our customers’ happiness ahead of our own bottom line. When this happens, we sometimes ask our customers to sign a “Goodwill Agreement.” The basic point is to ensure that Tesla doesn’t do a good deed, only to have that used against us in court for further gain. These situations are very rare, but have sometimes occurred in the past. We will take a look at this situation and will work with NHTSA to see if we can handle it differently, but one thing is clear: this agreement never even comes close to mentioning NHTSA or the government and it has nothing to do with trying to stop someone from communicating with NHTSA or the government about our cars. We have absolutely no desire to do something like that. It is deeply ironic that the only customer who apparently believes that this document prevents him from talking to NHTSA is also the same one who talked to NHTSA. If our agreement was meant to prevent that, it obviously wasn’t very good.

Fourth, Tesla’s own actions demonstrate just how rigorous we are about bringing issues to NHTSA’s attention. Not only do we regularly meet with NHTSA, we have also shown that we won’t hesitate to conduct proactive and voluntary recalls even when there is only a slight risk of a safety issue. Most recently, Tesla recalled third row seats in the Model X even though not a single problem had been reported by any customer. Before that, Tesla recalled a front seat belt pretensioner, even though not a single injury had occurred. In both of these situations and others before them, Tesla took these actions before anyone reported a concern to NHTSA. We did them on our own, because it was the right thing to do.

There is no car company in the world that cares more about safety than Tesla and our track record reflects that. The Model S is 5-star safety rated in every category and sub-category and Model X is expected to receive the same rating as soon as the government finishes testing. Recently, a Model S was in a very high speed accident in Germany that caused it to fly 82 feet through the air, an event that would likely be fatal in vehicles not designed to the level of safety of a Tesla. All five occupants were able to exit the vehicle under their own power and had no life-threatening injuries.

Finally, it is worth noting that the blogger who fabricated this issue, which then caused negative and incorrect news to be written about Tesla by reputable institutions, is Edward Niedermayer. This is the same gentle soul who previously wrote a blog titled “Tesla Death Watch,” which starting on May 19, 2008 was counting the days until Tesla’s death. It has now been 2,944 days. We just checked our pulse and, much to his chagrin, appear to be alive. It is probably wise to take Mr. Niedermayer’s words with at least a small grain of salt.

We don’t know if Mr. Niedermayer’s motivation is simply to set a world record for axe-grinding or whether he or his associates have something financial to gain by negatively affecting Tesla’s stock price, but it is important to highlight that there are several billion dollars in short sale bets against Tesla. This means that there is a strong financial incentive to greatly amplify minor issues and to create false issues from whole cloth.

That said, sometimes Tesla does make genuine mistakes. We are not and have never claimed to be perfect. However, we strongly believe in trying to do the right thing and, when we fall short, taking immediate corrective action.

Update (June 10th, 2016): After revising its NDA agreement as a result of this investigation, Tesla's PR department (assumedly acting on behalf of its CEO) had to retract some of the allegation lobbied against the Model S owner (Pete Cordaro) in its blog post...specifically where he lived and his daily usage of the EV.

Mr. Cordaro disputed that aspect of Tesla’s statement. “I live on an asphalt road. My Model S has been on a dirt road only once or twice in its existence.”

Mr. Musk said Tesla erred in its claim about the dirt road.

Apparently Mr. Cordaro was out on a Sunday drive, creeping down a dirt road hunting mushrooms in Pennsylvinia woods when he hit a pothole and the suspension failed.  The Model S owner says that “at most” he drove on a dirt road 10 times over the 73,000 miles his EV has travelled.

“I can’t believe Tesla would make such an outrageous statement that I live on a dirt road when all they had to do was Google Earth my address which they certainly have in their system and see that I live on an asphalt road in the city of Collinsville,” he said. “Nowhere going to or from my house is there a dirt road by my house.”

All things considered, Tesla has a reason to be upset at the turn of events on the actual issue at hand with the reported suspension defect; but they also did themselves no favors in the way they reacted to the situation, and again demonstrated a lack of maturity on the part of management and the PR department.  In the end, the company's credibility took a greater hit than if they said nothing.