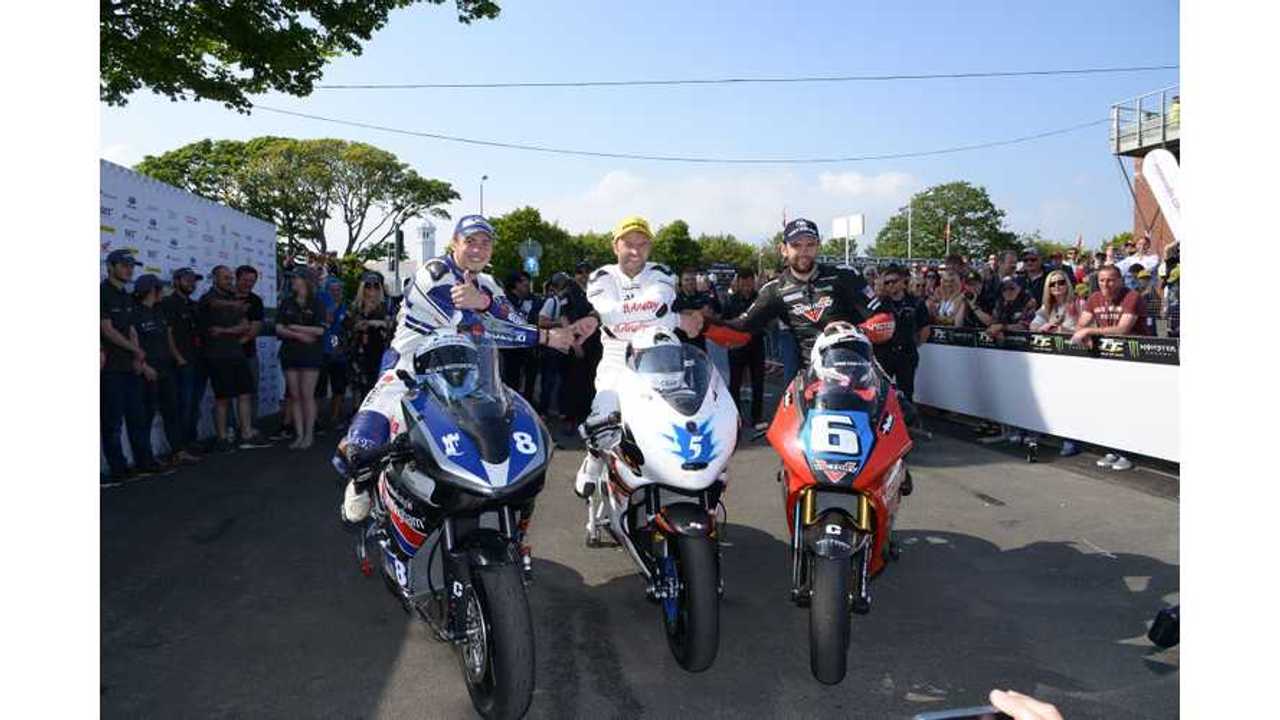 The few minutes of gap between this 2016's result and last year would likely have be closed by the second Mugen Shinden Go racer - John McGuinness, but the driver suffered a temporary technical problem that cost him well over 4 minutes.

The lack of new record indicates that all-new Shinden Go isn't as fast as Mugen perviously hoped for, but that's racing.

"There was no hint of the drama to come when McGuinness, winner of the last two SES TT Zero Races, set off at 4pm followed by his Mugen Shinden teammate Bruce Anstey.  William Dunlop on the Victory Brammo Power machine was third away. Belgian outfit Sarolea didn’t get post a qualifying lap and their riders Dean Harrison and Lee Johnston were positioned to start at the back of the grid.   However, they were unable to resolve their issues of earlier in the week and pushed the bikes off the grid.

McGuinness set off at number one and had a slight advantage of just over 2 seconds at the first timing checkpoint at Glen Helen but the Flying Kiwi was reported to be in the lead at Ballaugh as the Morecambe man suffered a temporary technical fault.

However, the Morecambe man eventually managed to get going after discovering the emergency stop button under the seat had been accidentally activated when he landed at Ballacrye. By that time, he’d lost almost four minutes and although he was able to finish the lap, the time lost meant he missed out on the podium altogether in fourth moving Daley Matheson into the top three with John McGuinness and Allan Venter riding the Brunel Racing machine completing the top five.

After the race Bruce Anstey said:

“I saw John slow down so I took it easy, slowed the pace just to make sure that I brought it home – job done.”

“The bike was perfect apart from a few stability problems but to be fair it couldn’t have gone much better really.”

“I’m absolutely delighted. I never expected to be on the podium at the Isle of Man TT this year.  The boys have been working really hard in the paddock. We still haven’t got the bike perfect but I think when we do get the bike perfect these guys are going to have to watch themselves because I think it’s going to be game on.”

A clearly disappointed John McGuinness said after the race:

“We’ve been testing in Japan and put a lot into it so to only finish fourth after all the effort that’s gone into it is a real shame. The bike was flying up until Ballacrye and when I stopped I just pressed as many buttons as I could to try and re-start. I eventually got going but I’d lost too much time but well done to my team-mate Bruce for winning the race.”