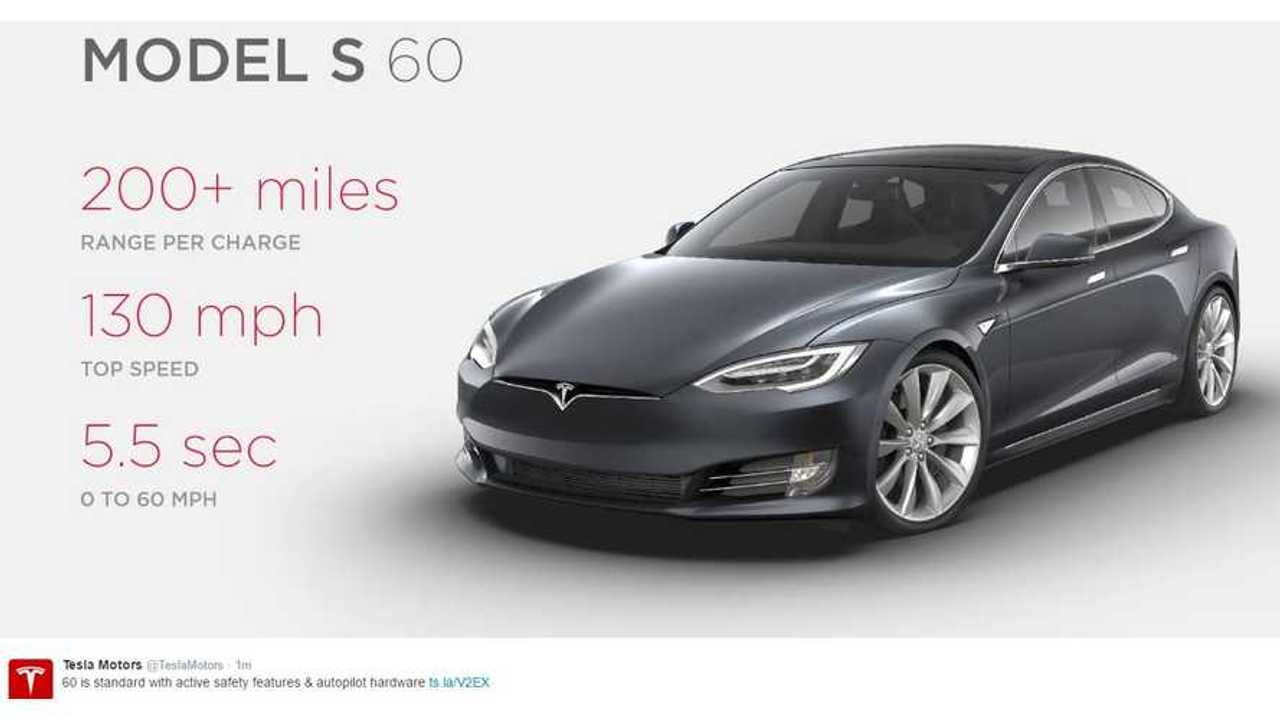 Tesla Motors has just announced that the Model S lineup will be expanded to include two lower-end versions: 60 and 60D.

Both the 60 and 60D actually come fitted with 75 kWh battery packs, which can be unlocked via a software update for $8,500 prior to delivery or $9,000 at any point in time after delivery.

The new versions of the Model S are available for ordering starting today.

As you know, Model S is designed to be a great car for every lifestyle, and we continue to make it even better. Last month we introduced design updates to Model S, and through continual software updates we’ve made Model S faster, smarter, safer and more enjoyable to drive. It’s part of Tesla’s relentless commitment to making its products better.

With these improvements, we’ve heard from a number of people who would like to buy a Model S, but can more easily afford it only at a lower price point. To respond to these requests, on Thursday June 9 we’re introducing two new variants of Model S – Model S 60 and 60D, offering a compelling feature set and a great value at a new low price.

The new Model S 60 delivers more than 200 miles of range, a top speed of 130 mph and zero-to-60 acceleration in 5.5 seconds, starting at $66,000. The all-wheel drive option brings even more range and performance, beginning at $71,000. And every Tesla comes equipped with active safety features and Autopilot hardware.

Keep in mind that when comparing the price of any electric vehicle to an internal combustion vehicle, it’s important to compare not just the out-of-pocket price, but also the effective cost of ownership. Factoring in annual fuel savings which typically ranges between $1,000 and $1,500, as well as available tax incentives, the effective cost of owning Model S 60 comes to about $50k.

And there are other advantages to owning a Tesla that add up over time, including: Less maintenance – Tesla vehicles don’t require regular maintenance like oil changes, fuel filters or smog checks. And our four-year/50,000 mile bumper to bumper warranty and eight-year/infinite mile battery and drive unit warranty come standard with Model S. Ample charging options – for most Tesla owners, home charging provides plenty of range for daily travel, and with an EPA range of over 200 miles, that’s still the case for Model S 60 and 60D. For long distance travel, there are many convenient Supercharger and Destination Charging locations throughout our network. New features via free software updates – as with every Model S, the 60 and 60D will receive free over-the-air software updates that add functionality and continue to improve the driving experience for years to come.

To provide customers even more flexibility over time, Model S 60 and 60D owners may later choose to upgrade their vehicles to a 75kWh battery with a software update, should they want to add to their car’s battery capacity in the future.