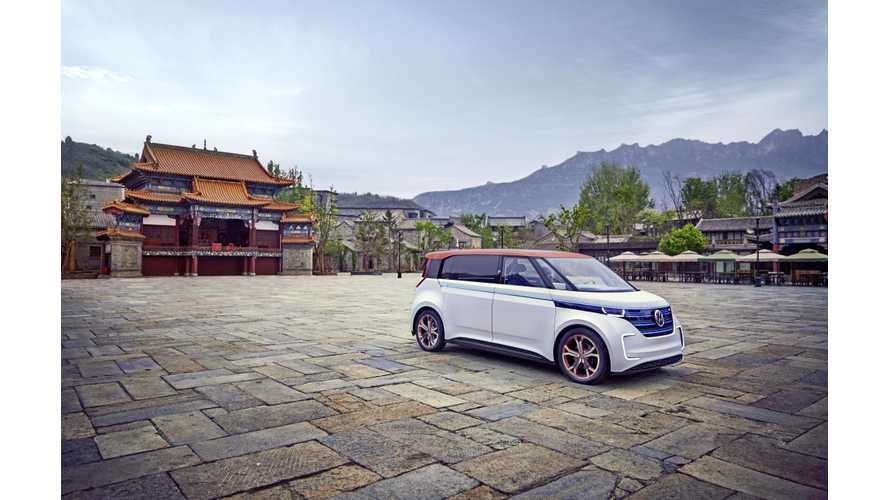 The concept electric car that made its worldwide debut earlier this year has range of up to 533 kilometres (330 miles - NEDC) on a 101 kWh battery.

However, to eventually see a production model of the BUDD-e, it would need to be built on the new Modular Electric Drive Kit (MEB), which won't be ready until 2020 (maybe 2019).

VW has been "on and off" with the BUDD-e's production status, but recent reports suggest it (or a close version based on the concept) will indeed be produced.

Volkswagen intends to introduce a total of seven all-electric and plug-in hybrid models in China by 2020, so perhaps this focused introduction of the BUDD-e in the country signals that all-electric utility vehicle could be lucky #7.

"The Chinese are fascinated by this Volkswagen, which draws visually on the legendary 'Bulli' and thus forms a bridge between the origins of the brand and a time far into the future. BUDD-e is the first Volkswagen based on the new Modular Electric Drive Kit (MEB). Approaching 2020 is when we will see the launch of the MEB models – powerful electric cars with ranges at the level of today's petrol counterparts. In the case of the 2016 CES show car that's 533 kilometres.

In China the people are very open to driving electric cars. The environmental conditions in the big cities there can be significantly improved in future through developments such as zero-emission, electrically powered vehicles. The state and major municipalities are promoting electric motoring through a variety of measures. One example: in megacities such as Beijing (21.5 million inhabitants, third-largest city on earth) or Shanghai (at 24 million inhabitants the world's largest) the number of newly issued vehicle registration numbers is being limited – however, without a registration number it is not possible to licence a new vehicle. The wait is therefore very long. However, purchasers of models with plug-in hybrid, electric or hydrogen drive systems receive the coveted registration numbers very much more quickly. The only condition: the vehicles, called New Energy Vehicles (NEV) in China, must be made locally in the country.

Volkswagen is pushing ahead at full speed with the development of fully and partially electrically powered vehicles. By 2020, seven new electric and plug-in hybrid models will have come onto the market in China, where they are also being produced. Against this background, the BUDD-e is indeed becoming an ambassador for a new kind of high-tech mobility. And what is fascinating about this is not just the drive system, but also the new form of operation and information handling via voice, touch and gesture control, plus large display landscapes."