At Age 101, This Driver Made The Switch To A Nissan LEAF 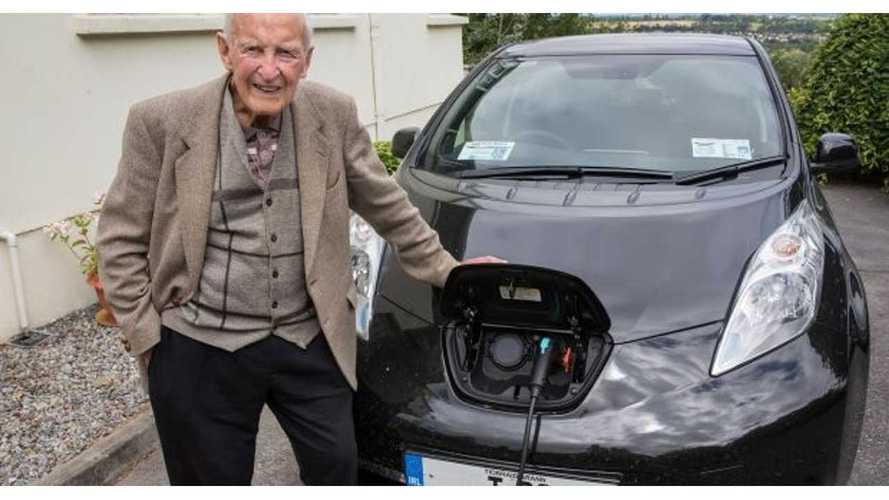 John Walsh, 101 year-old resident of Clonmel, Ireland, is doing his part to help the environment. He has never purchased a new car, and now, he has chosen a Nissan LEAF to be his first. Back in 1953, Walsh purchased a used Volkswagen, and after that, he drove company cars throughout his life. He said:

“I would never have dreamt of buying a car at this stage. My motivation was to do something to improve the environment and to conserve the supply of fossil fuels. The banks are paying no interest, so I decided to spend my money on an EV to do my own little bit to protect the environment.”

Back when Walsh was 15 or 16, he learned to drive in a Ford Model T. That was more than 80 years ago. He said that his father had a few of the old Fords and allowed him to drive them around the lot of the company he managed.

Walsh has a list of places he'd like to visit in his LEAF. However, he mostly intends to use the car to drive into town and to visit people. He explained that he is also sharing the vehicle with his son. Walsh continued:

“I am convinced that we have to do something about global warming and pollution. I am a late convert to environmental protection and a bit of a late starter driving an electric car but this is my way of playing my part. My son also enjoys driving the car on longer distances, but I have priority on it.”

Walsh can remember fuel shortages during World War II. He had to take up biking due to the fall of public and private transportation. He worked in Dublin as chief accountant with Bulmers until his retirement in 1981. Walsh said he would bike all the way from Dublin to Limerick (125 miles) to see and date his future wife. Today, this is over a two hour train ride.

Walsh turned 101 a few weeks ago. Nissan told him that if he could have driven an electric car for his entire driving career, he would be €120,000 ($134,000) richer. Walsh may be the "unofficial" first person to be able to compare the Ford Model T to the Nissan LEAF. Surely there are a few others that may have experienced driving a Model T and have since been in an electric vehicle, but it's safe to bet that Walsh is the only 101 year-old LEAF owner.