Chevrolet Bolt EV Priced From $37,495, Under 30K With Incentives 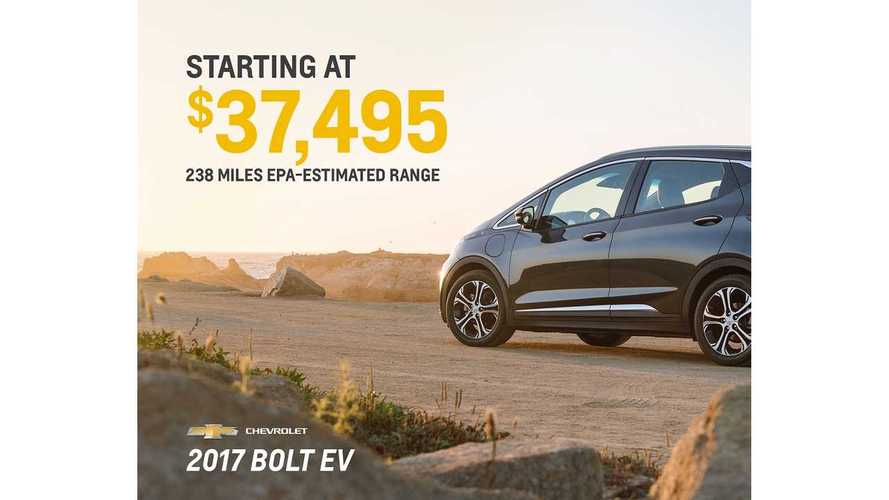 After recently surprising the market with an impressive 238 mile EPA range rating, General Motors has announced its Chevrolet Bolt EV will be priced from $37,495 including destination ($875) - again, as promised and under that $37,500 initial pricing target from 2 years ago.

“We have kept our promise yet again, first on range and now on price," Alan Batey, President of GM North America

Check out the full list of features found on both the LT and Premier models below.

“Value is a hallmark for Chevrolet and the pricing of the Bolt EV proves we’re serious about delivering the first affordable EV with plenty of range for our customers,” said Batey,

Once again, GM also didn't miss an opportunity to confirm the estimated arrival date for its all-electric car, stating that, "The Bolt EV will be available at select dealerships in late 2016."

As an additional note on the expected wider release date:  it appears that GM has plans on the Bolt EV being available throughout the US (and North America) shortly thereafter, as while announcing a price of $42,795 (+$1,600 DST) in Canada - which includes fast charging, Chevrolet stated that it would be available in "early 2017".

GM pretty much says it all with this graphic

Check out some promotional videos on the Chevy Bolt from GM (10 of them) here, while also the first long distance (~240 miles) test drive review here.