Watch Nissan CEO Carlos Ghosn's Presentation On Autonomy, Next LEAF To Get 200+ Miles 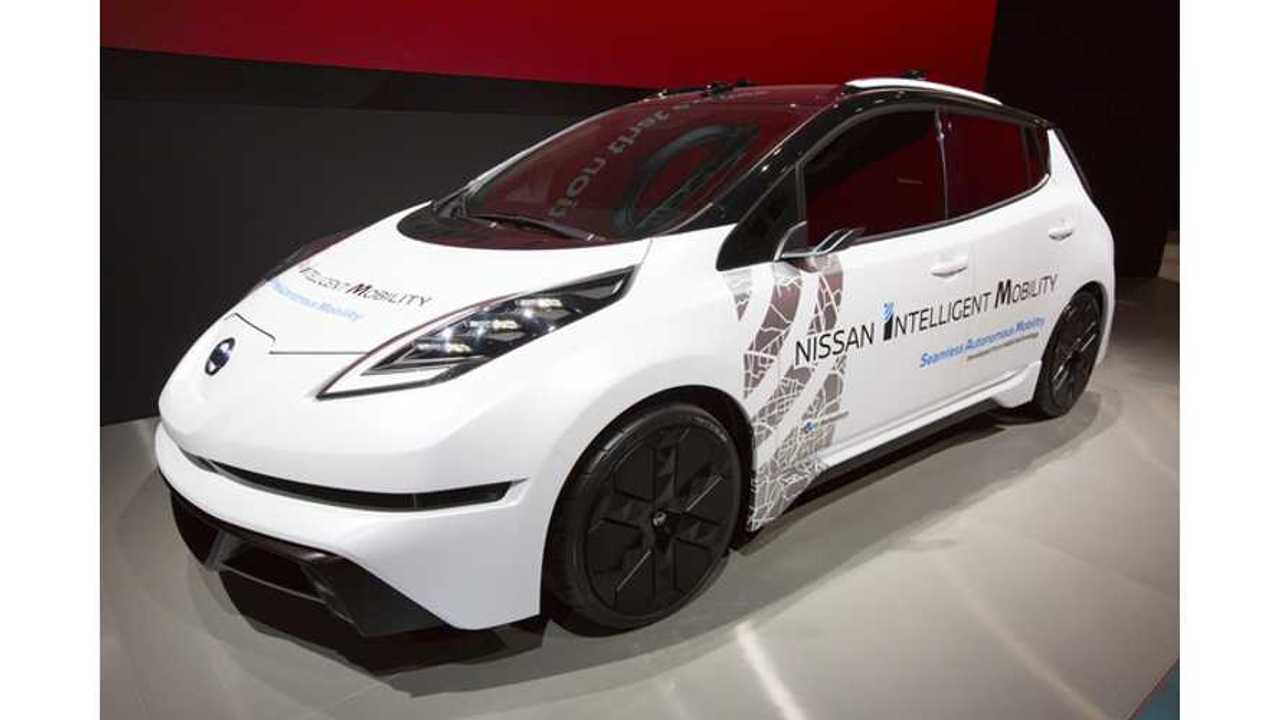 Nissan's CEO Carlos Ghosn was at CES 2017 in Las Vegas and made a keynote speech and presentation on "how Nissan Intelligent Mobility is helping Nissan realize its vision of the future", but also promised to "announce several technology advancements and partnerships that will benefit consumers".

The CEO has been coy when asked by the media directly about how much (if any) new EV-related content will be part of the CES show, stating that he "want(s) people to go to the show” to find out.

Could this be the event the CEO delivers the much anticipated Nissan LEAF upgrade announcement to the stage?

Technically, there is a 50/50 shot as the Nissan, Renault, Mitsubishi boss is also putting on a show next Monday in Detroit for the 2017 NAIAS as well.

Answer: No it was not, but rather the introduction of "Seamless Autonomous Mobility", although we got a look at a modified LEAF for that program, and a promise to see "a new LEAF" shortly, and some foreshadowing on the specs (below).

We are at CES this week to follow-up on this story and any new details, but more importantly, we will be in Detroit next Monday for the "big show"/NAIAS to catch the follow-up Ghosn stage performance.

You can also find the whole press blast on autonomy below, but here is the part of interest in regards to the LEAF.

"A new Nissan LEAF will be coming in the near future. The model will be equipped with ProPILOT technology, enabling autonomous drive functionality for single-lane highway driving.  This new LEAF will build on the company's leadership in electric vehicles, which includes more than 250,000 Nissan LEAFs sold worldwide since 2010. The new LEAF represents the next chapter of Nissan Intelligent Power."

On the next LEAF specifically,  Takao Asami, Nissan's senior VP of research and advanced engineering, said ahead of the Ghosn speech, that when the next LEAF does arrive, it will have "above 200 miles" of range, and the company is targeting 150 kW charge rates in the future.

Asami also offered that different size batteries and ranges might be offered between North America, Europe, and Asia - which not incidentally are regions Nissan has separate LEAF production facilities for.

Announcing the New Nissan LEAF: The Next Chapter in Nissan Intelligent Power

On stage at CES, Ghosn announced plans to launch a new Nissan LEAF, with ProPILOT technology, enabling autonomous drive functionality for single-lane highway driving.  The new LEAF is coming in the near future and represents the next chapter of Nissan Intelligent Power.

The new LEAF will build on Nissan's industry-leading position in electric vehicles (EVs). In 2010, Nissan was the first carmaker to introduce an all-electric vehicle to the mass market. Today, the Nissan LEAF is the world's best-selling EV with more than 250,000 units sold and more than 3 billion kilometers travelled, a distance to get to Saturn and back. In the process, the LEAF has prevented the emission of 497,227 tons of CO2. That is the equivalent of the emissions made by more than 52,000 homes a year in the United States.

To advance zero-emission mobility today, Nissan is proactively focusing on vehicle electrification by diversifying electric powertrains and fuel systems to adopt multiple fuel and energy sources to meet different market and customer needs. In addition to Nissan's core EV technology, Nissan has a diverse range of EV-based technologies in its portfolio. These technologies include e-Power (series-hybrid) and e-bio fuel cell electric vehicles. The new Nissan Note, also available with e-POWER powertrain, launched in Japan in the fall of 2016, became the best-selling model in the market in November."

LAS VEGAS – In his 2017 Consumer Electronics Show (CES) keynote, Nissan chairman of the board and chief executive officer Carlos Ghosn announced several technologies and partnerships as part of the Nissan Intelligent Mobility blueprint for transforming how cars are driven, powered, and integrated into wider society. These technologies will advance mobility toward a zero-emission, zero-fatality future on the roads.

"At Nissan, from the beginning, we work to bring the right technologies for the full spectrum of our vehicles and the most amount of people," said Ghosn in his keynote. "This takes more than innovation. It takes ingenuity. And it's exactly what we deliver through Nissan Intelligent Mobility."

Ghosn made five key announcements, which were further demonstrated on stage:

"We invite others to join us, as well, from tech partners to e-commerce companies, ride-hailing and car-sharing platforms, and social entrepreneurs who can help us to test and develop new vehicles and services, and make sure everyone has access to the latest technologies and services that bring value to their lives," said Ghosn.