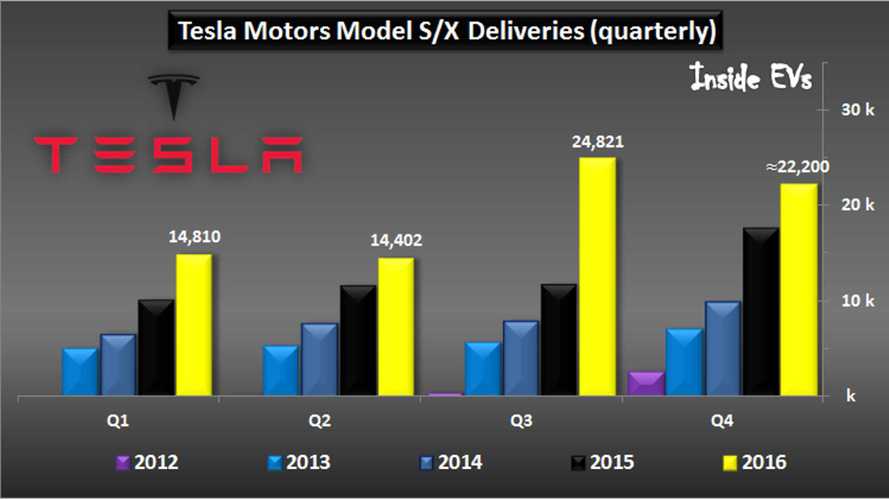 Tesla's recent report on its production and deliveries for the Model S and Model X in Q4 enables us to now check how things going after a record third quarter and decently strong Q4, painting the full picture of Tesla's year, and history to date.

Total production amounted to 24,882 and 83,922 EVs respectively for the fourth quarter and full year, while actual deliveries amounted to approximately 22,200 for the quarter and 76,230 overall.

Historically speaking, those are great results, as production increased 64% year-over-year, while sales by about 50%.

However, we have to note that Tesla aimed for more heading into the year (at least 80,000 deliveries), so if you are more of an "investor type" over strictly an EV enthusiast, that 4.7% miss might annoy you.

According to IEVs estimations, about 63% of Tesla sales falls on North America, which is considerably more than 50-53% in previous two years.

The reason for the domestic sway in 2016?  Model X deliveries kicked off in U.S. before other regions (which is also the largest market for the SUVs), and Tesla also faced some production difficulties/"transition" delays in Q4 getting new AP2 hardware-enabled cars to consumers, which forced it to focus on getting out as many "local" US deliveries as possible before the year ended.

Because Tesla noted 6,450 cars in transit to customers at the end of the quarter and registered record high number of new orders ("all-time record for us, were 52% higher than Q4 2015 and 24% higher than our previous record quarter in Q3 2016"), we can expect that next quarter will be much improved over Q1 of 2015, and also will see a lot more of an "international" mix.