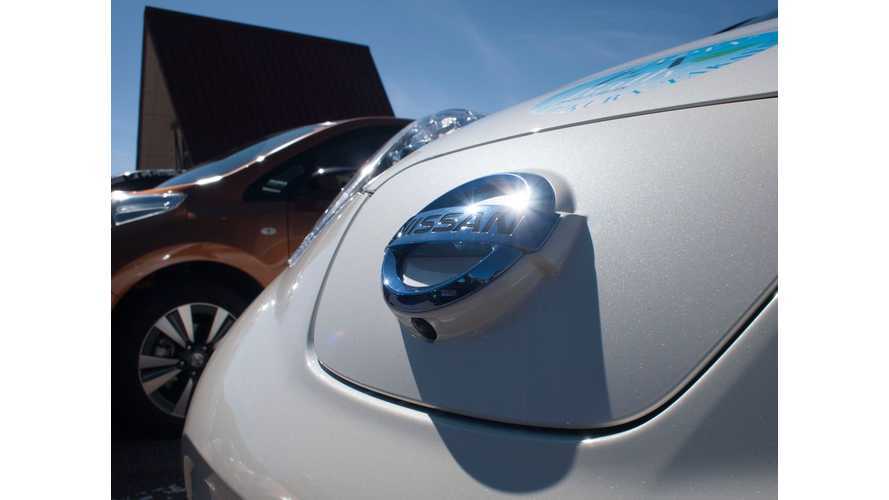 "A journey of a thousand miles begins with a single step" ... or something like that right?

For the first time since December of 2014, Nissan has increased year-over-year monthly sales in the United States this month, ending a string of 20 consecutive monthly fails.

In places "not the US" the Nissan LEAF continues to perform well (15,000th Nissan LEAF sold in the UK pictured above)

September both stopped the streak, while also set a new year-high:

Still, other than the slight gain against its former self in September, it is hard to find a silver lining for the LEAF's sales in the US, as the rest of the market has been gaining more than 50% year-over-year over the past four months

The LEAF's market share of the plug-in segment in the US fell to an all-time low last month in August (see chart below), hovering at just 8.5%.

Contributing to the pullback is Nissan's realization of losing touch with the US market, the Japanese automaker is stocking the LEAF at a third the level it was in 2014 when sales peaked at 30,200 units (still the US record for a single year's worth of sales for any individual model).  During September, Nissan stocked less than 1,500 units on average on US dealer lots.

Also of interest with Nissan during September:

*- together with its partner Renault, the "Alliance" has now sold more than 350,000 all-electric vehicles worldwide, by far the leader in this regard

*- Alliance partner Renault introduced a new, much improved, ZOE with 400 km range (NEDC) this month for Europe, and the expectation is for Nissan to shortly release a much improved version of the LEAF