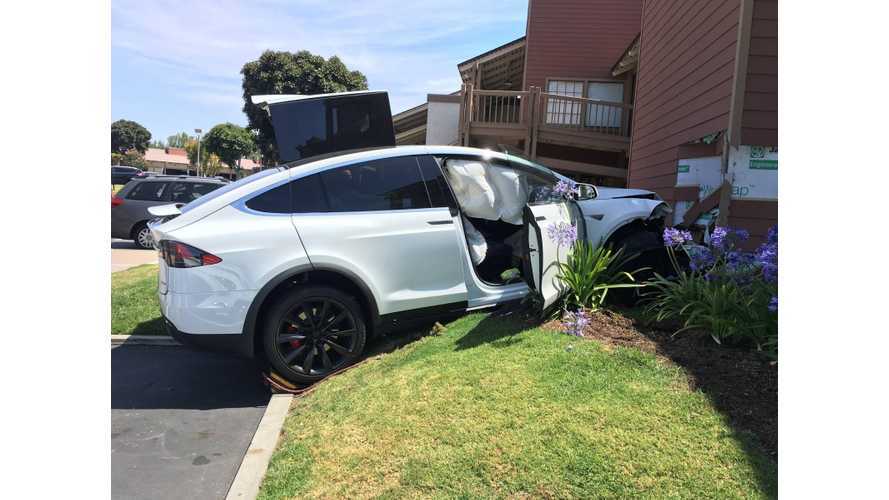 Unintended acceleration? Or just a case of slamming the accelerator, rather than the brake pedal?

This is not the first time that a Tesla reportedly accelerated on its own just prior to slamming into a building, but the previous instances involved a Model S, while this accident is with a Model X.

Video (below) of the scene aftermath (hat tip to sven!):

"A 5 day old Model X was involved in a serious car crash yesterday. According to the owner, the SUV was entering a parking stall at no more than 5 mph when the car "suddenly and unexpectedly accelerated at high speed on its own, climbing over 39 feet  (3.9 feet?) of planters and crashing into a building."

"Consequently, the airbags were deployed and caused burn marks on his wife's arms. The owner continued "the acceleration was uncontrollable, seemed maximum and the car only stopped because it hit and caused massive damage to the building."

To the best of our knowledge, there have been no other reports of unintended acceleration in a Model X and the NHTSA doesn't have any listed complaints on the X and unintended acceleration, which leads us to believe this is a driver error incident. Regardless, the "owner is requesting Tesla to stop deliveries of the Model X and investigate the cause of the accident before further drivers are involved in similar situations," according to Tesla Updates.

"This could have easily been a fatal accident if the car's wheels were not turned slightly to the left. If they were straight, it would have gone over the planters and crashed into the store in front of the parking stall and injured or killed the patrons."

We're sure that Tesla will investigate the cause of this accident and hopefully will provide us with more info soon.

UPDATE:  Tesla has made a statement saying that they checked vehicle data logs and that the Model X was operating under manual control (not operating in Autopilot or cruise) when the accident occurred.

Tesla say the vehicle had been travelling at 6 miles per hour, until the accelerator pedal was increased to full 100%.  Tesla says the Model X responded to the driver's direction as one would expect.