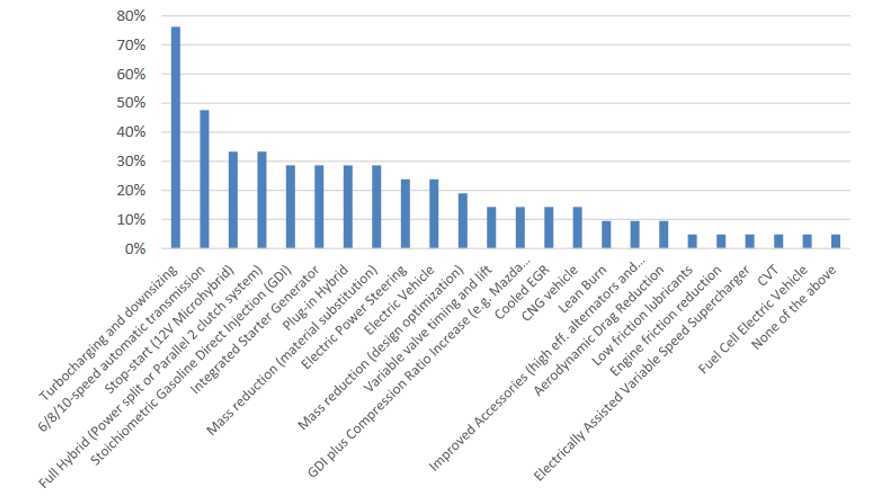 CALSTART's survey of Tier 1 automotive suppliers reveals that they do not necessarily see EVs as the main force to meet 2025 Federal Light-duty Vehicle fuel economy regulations.

With that said, the majority of these suppliers likely have some self-interest at heart when answering this question, as an EV platform most likely eliminates many of the parts they are currently supplying the automakers.

Anyway, the three most popular answers to hit 2025 regulations were:

Plug-in hybrids and EVs are offered as solution in the middle of the pack, while fuel cell electric vehicles seem to be orphaned by suppliers (which begs the question why some automakers have other opinions).

"When presented with a list of technologies that might be used to meet fuel-efficiency standards, suppliers picked turbocharging and engine downsizing, along with higher-speed automatic transmissions, as the most critical.

Hybrid technology was also viewed as important, along with variable valve timing, gasoline direct injection, and mass reduction. Suppliers were split on whether or not meeting the standards would ultimately require more electric vehicles than are already slated to hit the roads under state zero-emissions vehicle requirements."

According to the CALSTART report, 29% of survey respondents expect that there will be 2% more EVs than the base requirement in 2015 to meet the fuel economy standard overall.

"Deployment of electric vehicles is required under the ZEV mandates that exist in California and various other states (requiring electrification in 15% of new light-duty vehicle sales by 2025, which equates to about 4% of new light-duty vehicle sales nationwide). 29% of respondents indicated that they would expect at least an additional 2% of electrified light-duty vehicles above the ZEV mandate requirements to be necessary to meet the 2025 targets. In comparison, 24% of survey respondents felt that there would be sufficient improvements in ICE technologies, lightweighting and hybridization technologies to meet the 2025 targets without additional electrification.

During the interview, Eaton indicated that achieving the GHG targets is dependent on the level of EV penetration. While the targets are still achievable without a large increase in the EV penetration rate, the targets could be achieved more easily if they were complimented by investments in EV charging infrastructure. BorgWarner suggested that an electrification level of 30% will be needed to meet the targets, which is even higher than the estimate presented by the EPA in the latest midterm report."

Full report: Survey of Tier 1 automotive suppliers with respect to the costs and performance of vehicle technologies

“This survey underscores the degree to which deploying new fuel-efficient technology is already baked into companies’ businesses plans,” said John Boesel, president and CEO of CALSTART. “Companies are clearly ready to innovate and see the upside in the standards.”

CALSTART commissioned Ricardo Energy & Environment - a global environmental consultancy that specialises in the development and implementation of sustainable policy and technology across the automotive industry - to conduct the survey over the summer. The firm polled and interviewed 23 suppliers, almost all of them global Tier 1 suppliers that sell parts directly to automakers.

According to the survey:

Mihai Dorobantu, the director of technology planning and government affairs at Eaton Vehicle Group, a major automotive supplier that participated in the survey, said he appreciated CALSTART seeking insights from advanced technology suppliers.

“Eaton has cost effective technologies today that help manufacturers improve fuel efficiency and reduce carbon dioxide emissions,” he said, “We’re actively developing other fuel saving and electrification technologies for internal combustion engines and electrified propulsion, that will further improve vehicle performance today and into the future. Regulatory standards that are aimed at achieving real fuel savings are helpful for Eaton and for the industry as a whole. They create a clear path that allows for long-term investments in advanced technologies.”

When presented with a list of technologies that might be used to meet fuel-efficiency standards, suppliers picked turbocharging and engine downsizing, along with higher-speed automatic transmissions, as the most critical. Hybrid technology was also viewed as important, along with variable valve timing, gasoline direct injection, and mass reduction. Suppliers were split on whether or not meeting the standards would ultimately require more electric vehicles than are already slated to hit the roads under state zero-emissions vehicle requirements.

Earlier this summer, the Environmental Protection Agency (EPA), Department of Transportation (DOT) and California Air Resources Board issued a technical analysis of Corporate Average Fuel Economy (CAFE) and greenhouse gas standards for light-duty cars and trucks, focusing on mileage requirements for model years 2022 to 2025. The agencies will take public comments on the analysis until September 26, and will formally propose new requirements next year.

Starting in 2008, agencies reformed fuel-economy requirements to make them footprintbased, meaning smaller vehicles have higher miles-per-gallon requirements while larger vehicles have lower ones. Suppliers emphasized that even as all vehicle types become more efficient, consumers are expected to buy more large cars, trucks and SUVs if gas prices remain low.

Overall, federal agencies project a fleet-wide fuel economy average of between 50 and 52.6 miles per gallon under test conditions for the 2025 model year. That translates to an average of 36 miles per gallon in actual on-road performance, which is about what today’s gasolinepowered Honda Fit already achieves.