63% of All Housing Units In U.S. Have a Garage, Could Install EV Charging Station 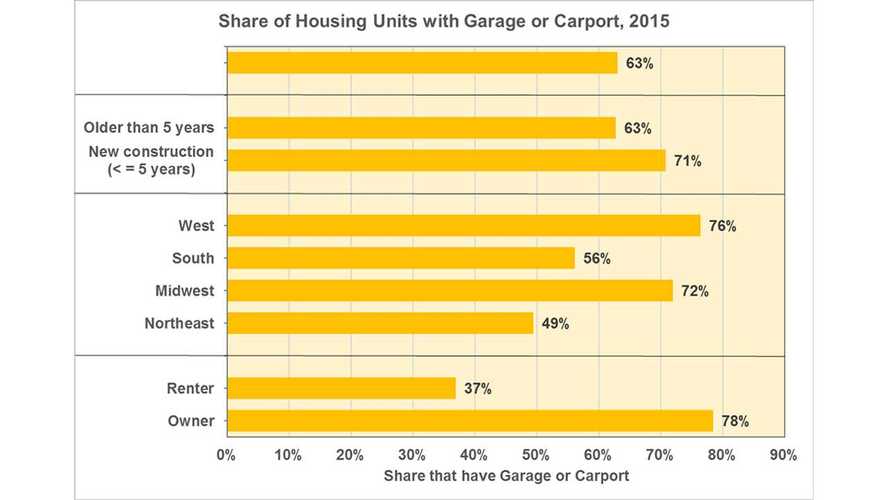 According to the DOE’s Office of Energy Efficiency & Renewable Energy, nearly two-thirds (63%) of all U.S. households have a garage or carport available to them (and often with electricity already wired in).

In other words, those 63% who own a parking space, in theory, could equip an EVSE charging unit for a future plug-in vehicle purchase.

And the ratio is higher for new household occupancy builds - 71%.

As the plug-in vehicle market in the US barely exceeds 1% for most months (unless you are talking about the recent, and very impressive, 1.47% gain in December), the lack of a garage or carport certainly won't limit sales in the near term - it could encourage them; although we have to note that plugging in is still a significant hurdle for a fair chunk of the population at large..

"According to the newly released 2015 American Housing Survey, 63% of all occupied housing units have a garage or carport. Garages and carports often have access to electricity for parked vehicles, so these data are important for electric vehicle market analysis. Seventy-percent of new construction units (five years old or less) have a garage or carport. The West and Midwest regions of the country have a greater percentage of housing with garages or carports, each with over 70%. For rental housing units, only 37% have a garage/carport, as compared to 78% for those owning housing units."